Posted by Shanna at 9:00 AM No comments: 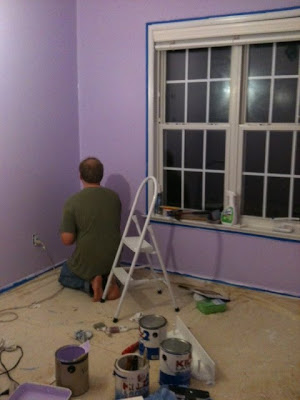 .... nearly complete. A little sassy lilac has transformed
Elisabeth's room into one better fitting a girl.
Posted by Shanna at 6:26 PM 4 comments:

This was taken in NYC a little more than a year ago.  We may be seeing friends there again soon...... 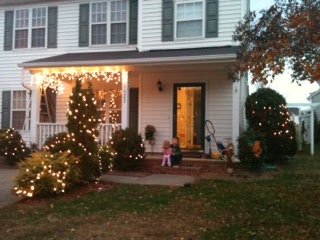 This is the earliest we've ever decorated for Christmas!
Posted by Shanna at 5:14 PM 1 comment:

Elisabeth has been taking Ballet this fall and she is really enjoying it. One day I took the still camera and got a few photos. Below is a series of snapshots during a jump from the plie position. I can't remember the fancy name for it. This was probably the most challenging day of the trip.

It involved both families carrying, rolling, and herding five (5) suitcases, two (2) strollers and three (3) kids from our hotel to the nearest metro stop (thankfully it was downhill). Then from a metro stop to a ferry, which happened to include going down and then up stairs. Then from the ferry a short distance to the train - which again included steps. (Next time we will fly all the way to Ankara - now that we know how to obtain domestic flights at a more affordable rate than what shows up on Orbitz.)

We were finally able to sit down and relax as we took the slow train from the historic Hydarpasha Train Station to the town of Eskishehir. This, however, presented yet another challenge - using a squatty potty on a moving train! Thankfully, Elisabeth was still in diapers at the time.


Once in Eskishehir, we had to lug ourselves and our baggage from that train to another high speed train that would take us on to the capital city.  (High speed rail will go all the way from Ankara to Istanbul in the near future - yay!)

I think this is only the second time I have traveled by train and it is really a great way to see the countryside.

Our friends (both named Levent) met us at the airport.  The Burns went home with one Levent and we went home with the other to a suburb of Ankara.  When we arrived, Vildan greeted us and quickly made us feel at home. We settled in, began catching up with our friends, and ate a fantastic, home cooked, Turkish meal.