We are finally finishing up our history curriculum on the Middle Ages (The Story of the World: History for the Classical Child: The Middle Ages: (Vol. 2)). History is a subject I really enjoy, so I tend to add lots of supplementals. I was excited when we finally got to the Elizabethan Age and Shakespeare so that we could utilize all the wonderful resources out there on the subject.
There are two great books, both can be found at the library, that I really like and recommend:  Shakespeare: His Work and His World and Tales From Shakespeare Student Edition Complete And Unabridged by Charles and Mary Lamb. There is also a graphic version that is particularly good as a first introduction for younger kids also called Tales from Shakespeare and is pictured above.

In our curriculum, the story of Macbeth was used as the introduction to Shakespeare. I chose to also focus on Hamlet as we are fortunate to live in an area with a Shakespeare Theater where Hamlet was performed this last season.  My 10 and 12 year old enjoyed the slightly abridged version of Hamlet at Orlando Shakes though they still thought it was long. (They were not wrong.)

In addition to these book materials, I found several videos that were entertaining and insightful for all of us. I have mentioned videos by Crash Course in the past for history topics, but they also have both a Literature and Theatre video series that include information about Shakespeare and his works. The literature video series has episodes that give an overview and literary importance of Hamlet, The Sonnets, and Romeo and Juliet. The theatre video series includes several episodes expressly about Shakespearean Theatre in a historical context. (Since every parent has different filters for their children, I suggest parents watch these first.)

TedEd has some great educational content in general as well as this little gem on Shakespeare's Macbeth:

As you learn about Shakespeare and his works, one can't help but discover the controversy surrounding the identity of the man himself. There is another TedEd talk on that subject called, "Did Shakespeare write his plays? - Natalya St. Clair and Aaron Williams" and a documentary that I personally found fascinating entitled "Last Will & Testament." (Last Will & Testament is currently available on Amazon Prime and I believe PBS Passport.)

I was already convinced of the importance of Shakespeare's works when at a recent homeschool convention I learned that the works of Shakespeare are considered Honorary Classics. There is The Iliad and The Odyssey by Homer, The Aeneid by Virgil, The Divine Comedy by Dante, The King James Bible and then the works of Shakespeare, considered by many to be the "Western Canon." I look forward to delving more into the works of Shakespeare in the coming months and years. Once again, I find myself learning along side my children and finding new interests and amazement in things that I would have never before imagined and I am grateful.

Posted by Shanna at 7:30 AM No comments: 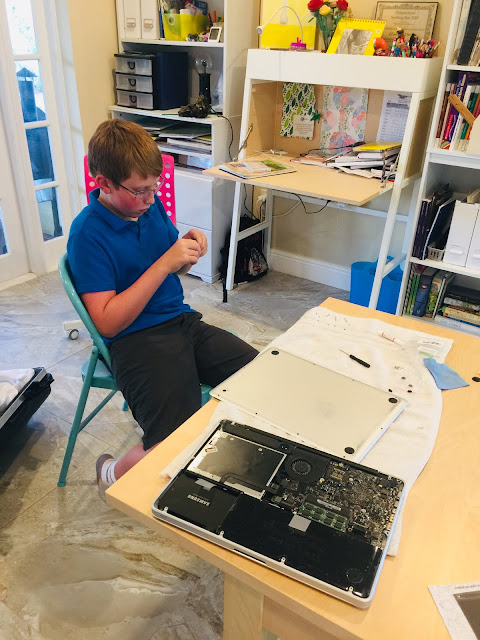 Jonah installed new feet on my computer today for my Mother's Day gift!
A couple of weeks ago, I told him about how for two years I have had these new plastic feet for my 10 year old laptop computer and have been too intimidated to install them myself as it required the computer to be slightly disassembled. I suggested he may need some help from Daddy, but that this was the gift I wanted for Mother's Day. Well, Daddy didn't need to help at all!
Over the last year Jonah has gotten braces (and dealt with all the maintenance and appointments that go with them) and glasses as well as learning how to use contact lenses. He has experienced the glories and struggles of competition both in fencing and First LEGO League, learned how to be a team player in our family and in First LEGO League, started mowing the lawn for a bump in allowance and, just this week, cared for and entertained children much younger than him at church functions. When today rolled around, he had all the confidence in the world to take my laptop apart and replace the plastic doohickies so my desk won't get scratched up. It was awesome!
He has been growing and maturing a lot the last year in many different areas. This has made me a bit nostalgic at times, but, especially today, I'm really appreciating his newfound confidence and maturity. Happy Mother's Day to me!
Posted by Shanna at 9:41 PM No comments: