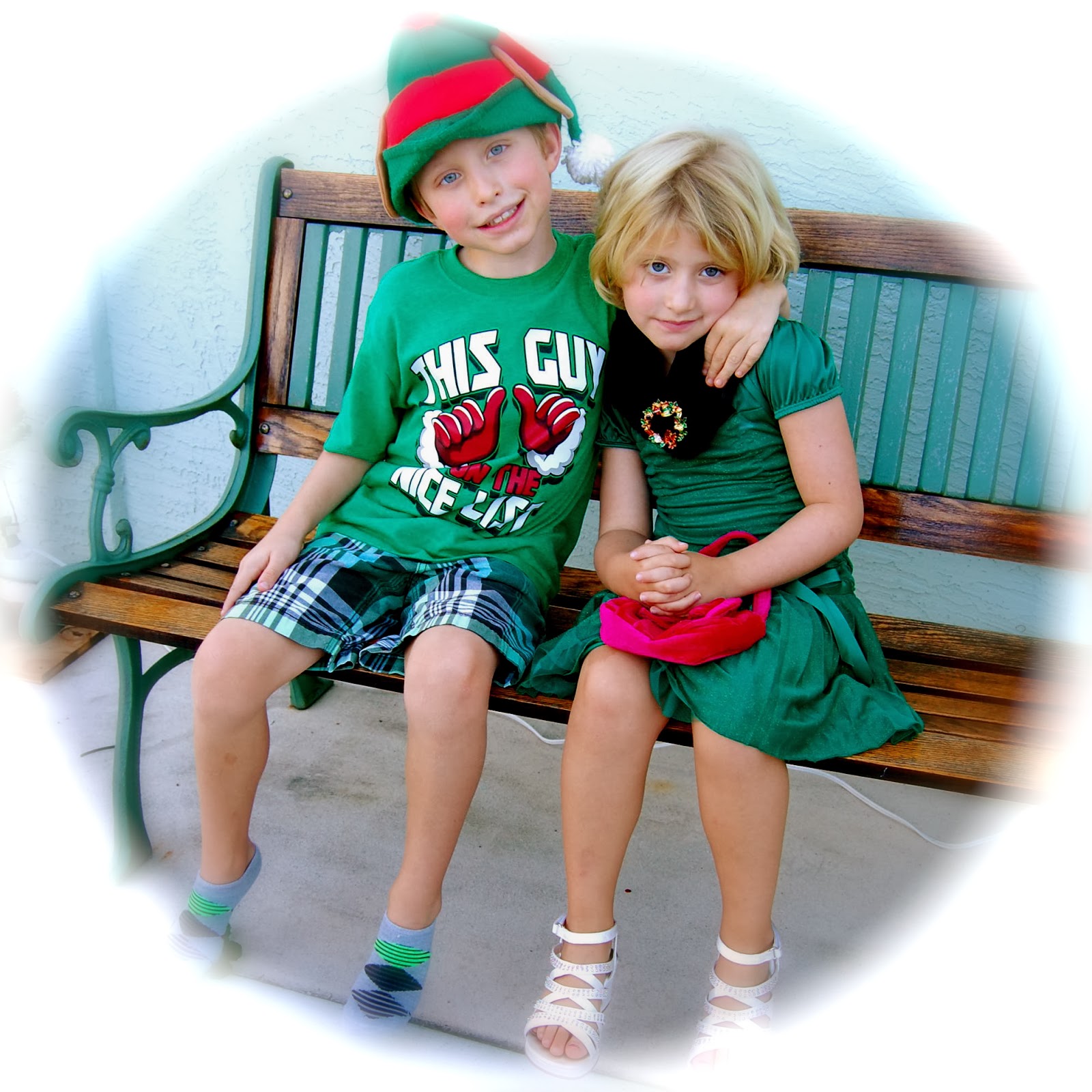 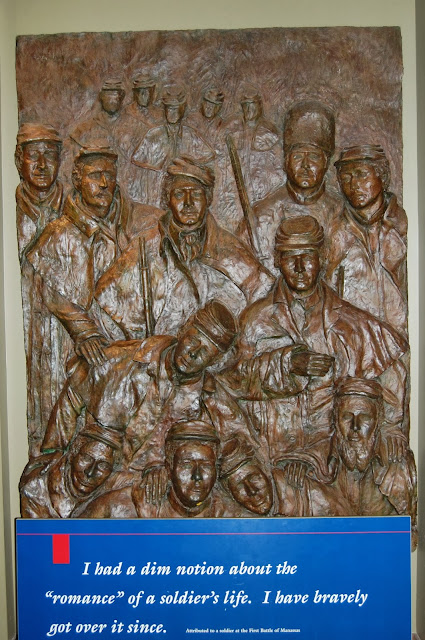 Posted by Shanna at 7:41 PM No comments:

Getting Glasses and Going Short

My babies are looking all grown up. Jonah got his first pair of glasses today. And Elisabeth got a short haircut this week. 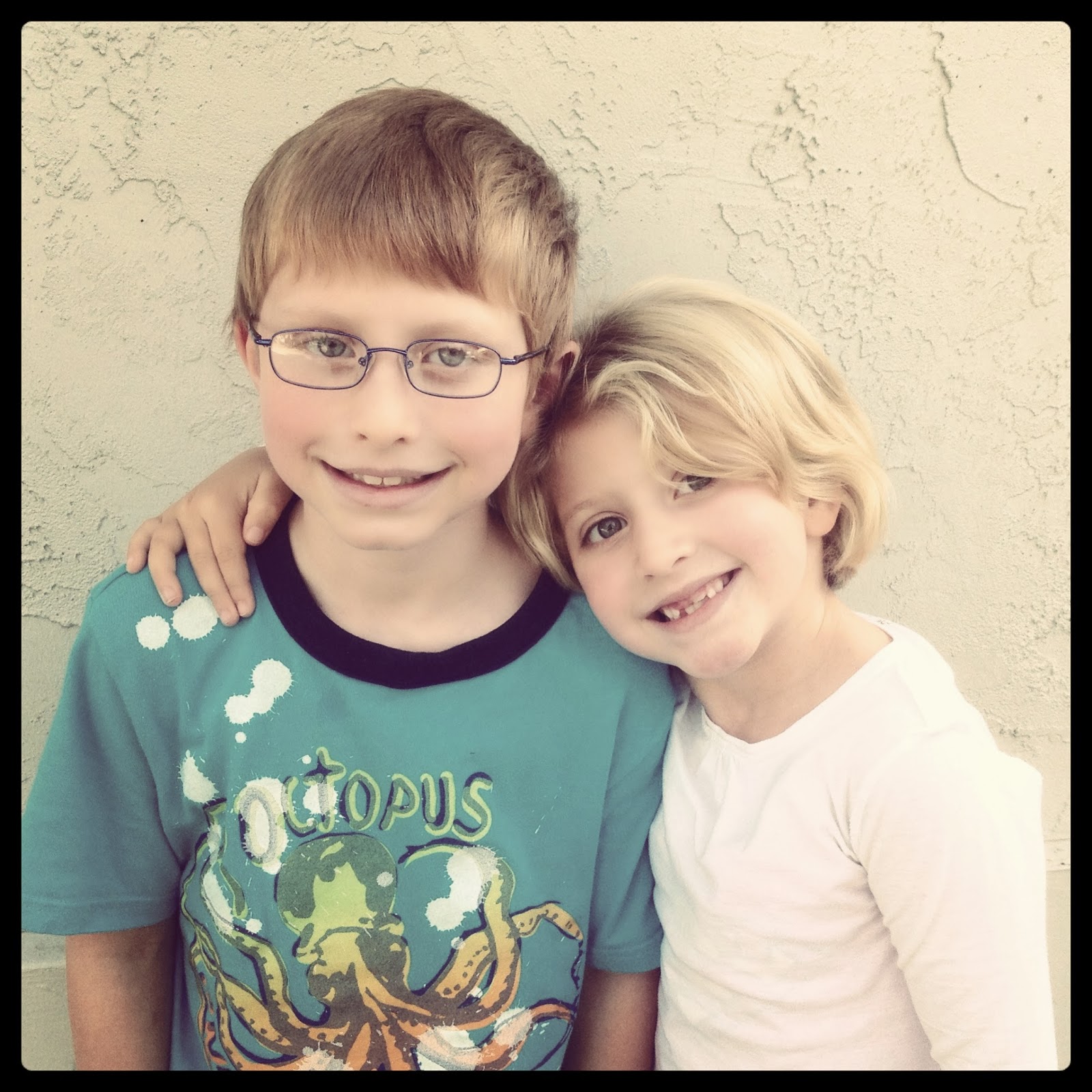 Helping decorate the Christmas tree at Grammie and Papaw's house. 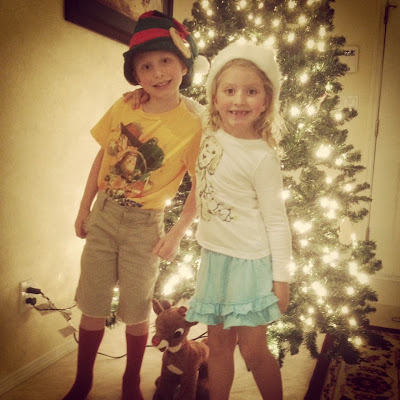 Posted by Shanna at 9:45 PM No comments: 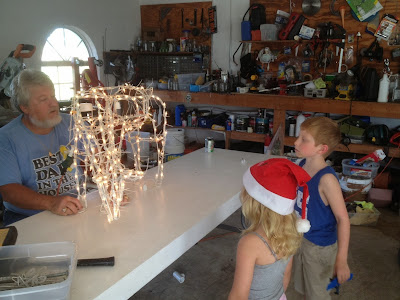 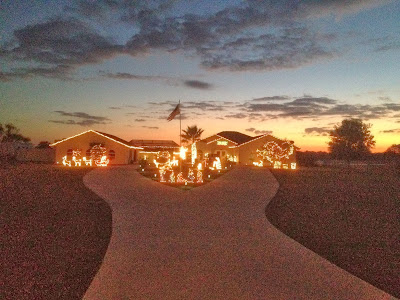 We have been staying at my parents during this time of transition given that it is the holidays. Papaw enlisted us to help put up the Christmas lights. He did it all himself last year which is amazing because it's a major operation. We enjoyed helping out this year.
Happy Holidays y'all!
Posted by Shanna at 11:58 AM 1 comment:

Fishing on the Kissimmee River 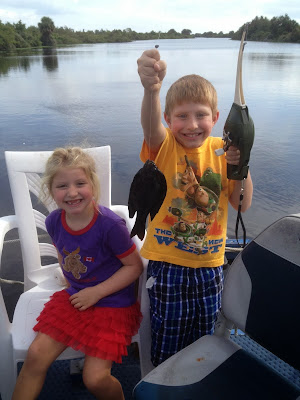 Jonah got his first keeper yesterday!
Posted by Shanna at 9:32 AM 1 comment:

Email ThisBlogThis!Share to TwitterShare to FacebookShare to Pinterest
Labels: Fishing

My son loves the "You Wouldn't Want to....." book series. They are a great introduction into history for young children. One of the first books we discovered in this series was You Wouldn't Want to Be in the First Submarine!: An Undersea Expedition You'd Rather Avoid. Through this book, we were first introduced to the amazing story of the Civil War era submarine, the H. L. Hunley. The Hunley is significant in that it was the first submersible to sink an enemy vessel. While it played only a small role in the American Civil War, it was a major technological advancement of the era. Tragically, three crews of men perished in the operation of this vessel including it's final successful mission against the Housatonic.

After reading You Wouldn't Want to Be in the First Submarine!, my son was interested enough in the story to want to read other books on the subject including Shipwreck Search: Discovery of the H. L. Hunley (On My Own Science) and Secrets Of A Civil War Submarine: Solving The Mysteries Of The H. L. Hunley. I even found an audio version of Raising the Hunley: The Remarkable History and Recovery of the Lost Confederate Submarine (American Civil War) for the whole family to listen to during a family trip. This book covered the 150 year old historical facts around the development and deployment of this remarkable vessel as well as it's recent discovery and recovery off the coast of Charleston, South Carolina. It was during the conclusion of this book that I learned about the Friends of the Hunley.

Friends of the Hunley is a non-profit entity that was set up by the Hunley Commission to help raise money for the recovery, conservation, and ultimately the exhibition of the submarine. After a quick internet search, I found that the recovered vessel was housed in Charleston and tours to the public were available. So we decided to make a point of visiting Charleston for the express purpose of seeing the Hunley for ourselves. The tour was well done. Having read and listened to the various sources listed above, though, the tour was mostly a review of what we already knew with the marked distinction that we could see the actual objects mentioned including the steal hull of the Hunley itself.

The Hunley is currently housed in a large warehouse looking building where scientists from Clemson University are working to stabilize what remains of the ship so that it may eventually be displayed in an open air exhibit. On the premises of this research site is a gift shop and small interpretive area with models and a full scale replica of a section of the Hunley as well as props from the 1999 TNT movie The Hunley (Tvm).
If you have any kind of interest in Civil War history, naval history, the history of Charleston, or submarines in general, you will find the facts surrounding the H.L. Hunley most fascinating. You wouldn't want to.... miss out on learning about this enthralling piece of American History and innovation.

Posted by Shanna at 9:49 AM No comments:

Last night, we went to the Holiday Festival of Lights at James Island County Park. The festival has been going on for 24 years and this year began November 8th and ends December 31st.

There are over 700 light displays visible from the comfort of your vehicle as you drive through the winding park roads. There is also a place to park and walk around. We saw a sand sculpture, gingerbread houses, and some light displays that you can't see from the road including a one that blinks to music - my favorite. There is a carousel, train, and climbing wall that require the purchase of tickets. Several large gas fire places are available to warm up and roast marshmallows - $2 marshmallow kits are available at the concession or bring your own. Other concessions are also available. We avoided the Santa Gift shop and Sweet Shop, but they make a nice addition.

Admission is $15 per car (15 passengers or less) seven days a week. Monday through Thursday, if you donate a nonperishable food item, the entry fee is $5 off.

My kids loved it and it put us all in the holiday spirit. 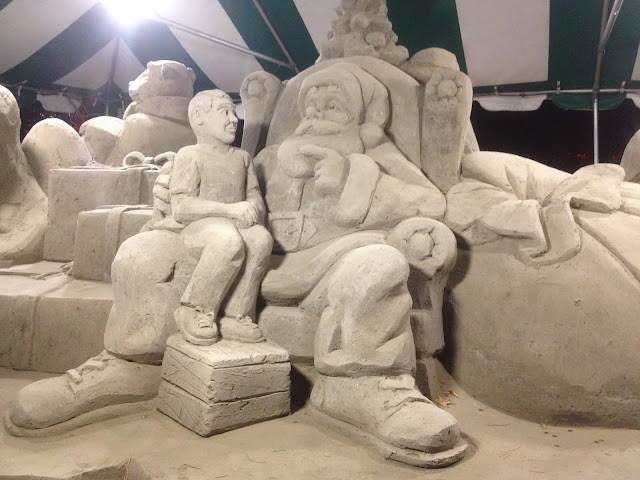 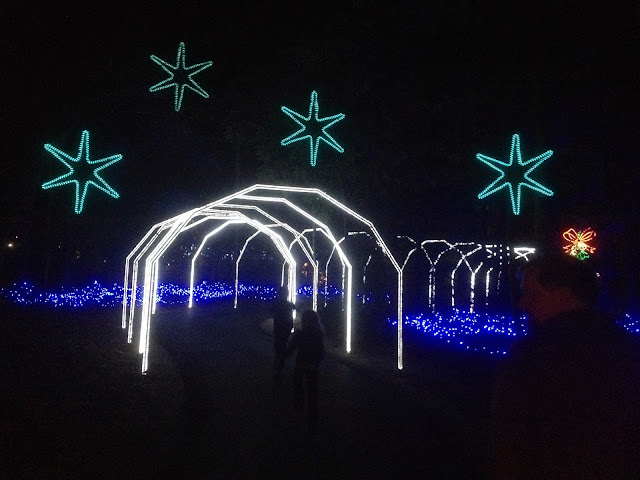 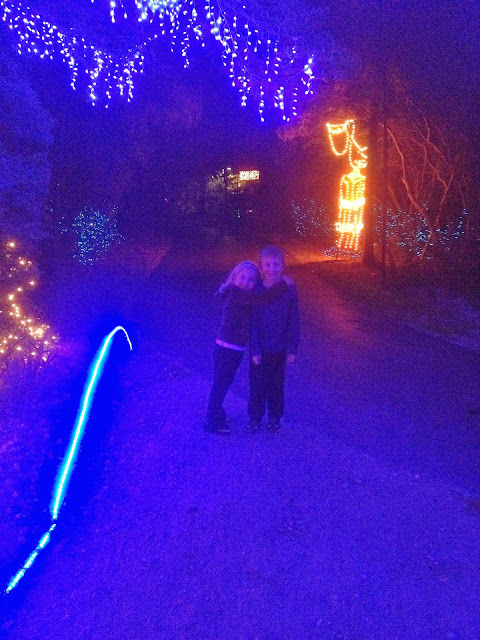 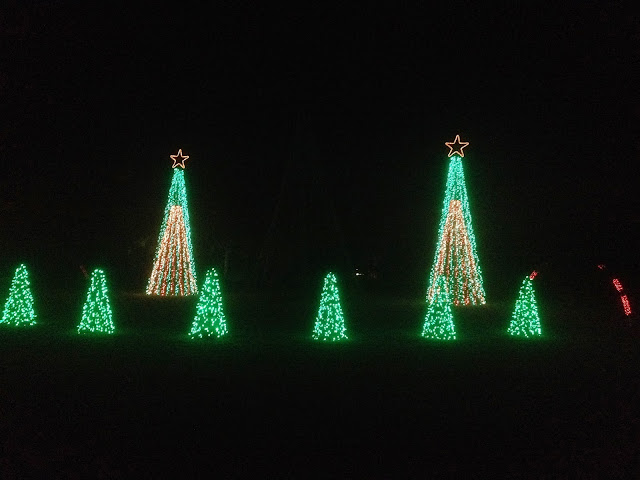 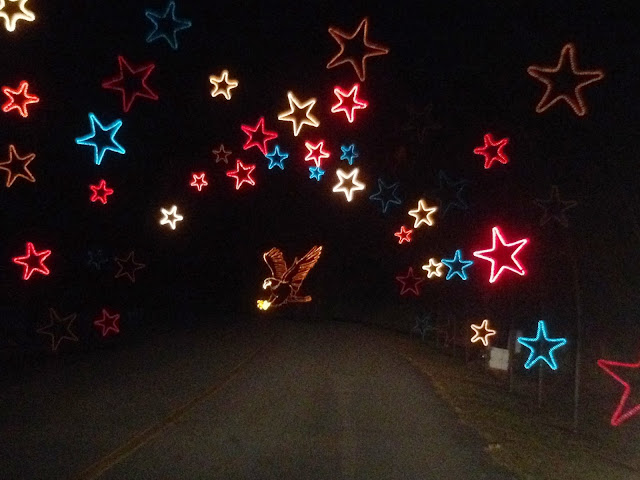 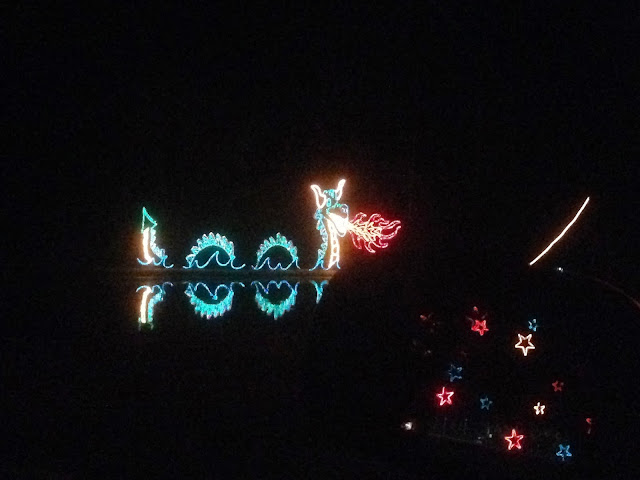 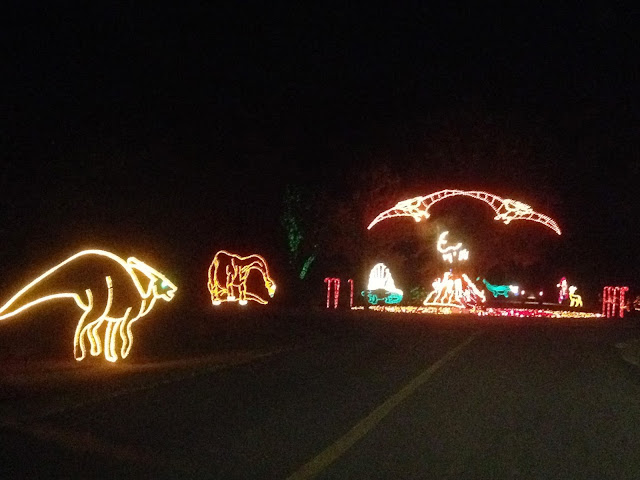 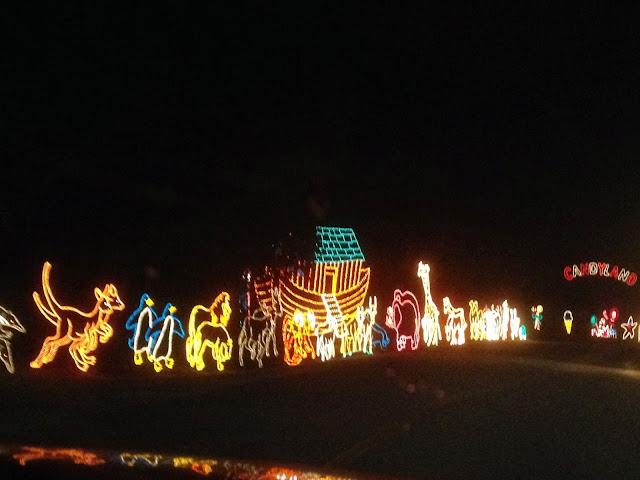 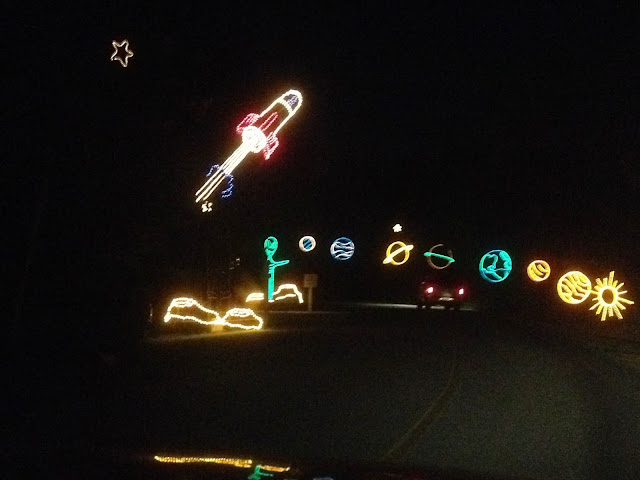 We are staying just outside of Charleston, South Carolina this week. On our way home from seeing the H. L. Hunley, we decided to take a detour with no particular destination in mind. We ended up in Johns Island, SC where we started noticing signs for Angel Oak "this" and Angel Oak "that." All of the sudden I was reminded of a NPR story that I saw a month ago about the development threat to a huge oak tree that has been around for hundreds of years called the Angel Oak. After a quick internet search on my smartphone, I realized we were in fact in the vicinity of that Angel Oak and set it as the new destination in the GPS.

My husband had not heard anything about it and was particularly surprised when we we drove up. This sprawling live oak (Quercas virginiana) tree has branches the size of tree trunks; many of which are braced with supports. (If you were over 400 years old, you'd need a cane or two as well!) It is a thing of beauty and history. Just think, it has witnessed not only the founding of our nation but the colonization of a continent. 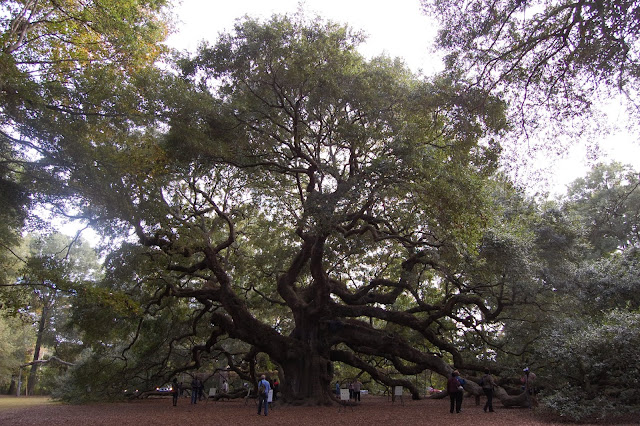 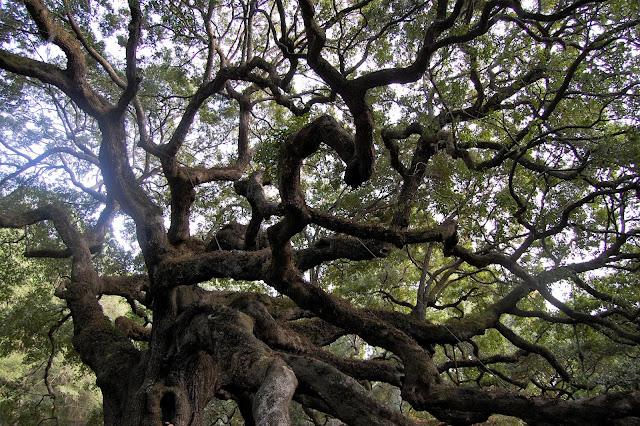 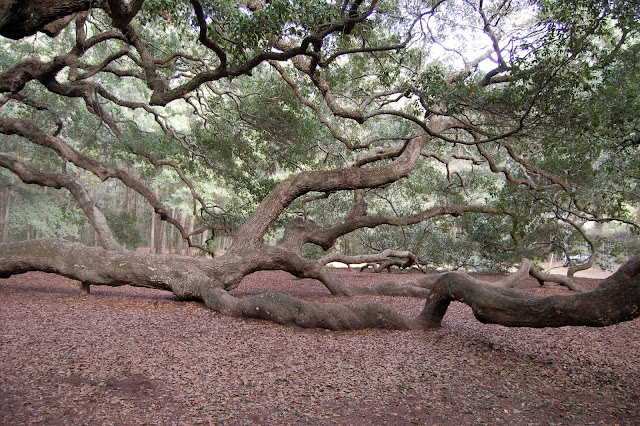 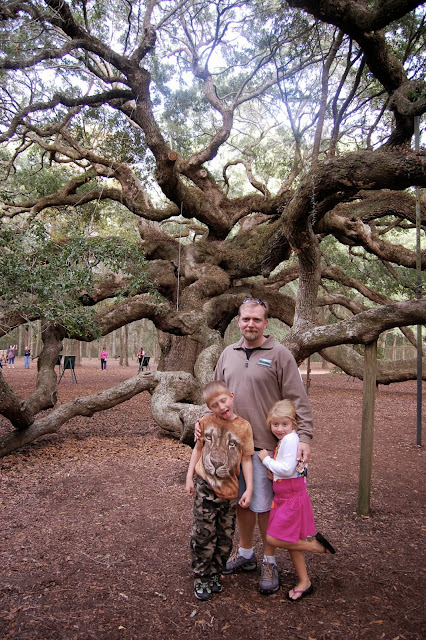 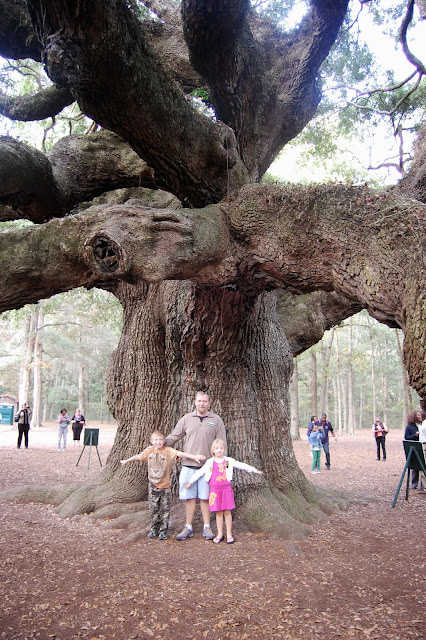 RV's on the Fort Fisher to Southport Ferry? Yes, but....

After spending a week catching up with friends in Carolina Beach, we took the Fort Fisher Ferry to Southport this morning. We figured that after the 6-hour Newfoundland Ferry crossing, this 30-minute ferry ride would be cake. And, it would have been perfectly uneventful except that the ferryman flagging us during loading nearly had us clip the pilothouse with our awning. Thankfully one of the other ferryman was paying attention and halted our forward movement. We had to reverse and get over a bit more to clear the structure.

It was $15 because our rig is over 40 feet in length (it's $5 for autos). We probably saved that much in gas, however, and got to enjoy a nice boat ride to boot. We even spotted some dolphin or porpoise during our Cape Fear River crossing. 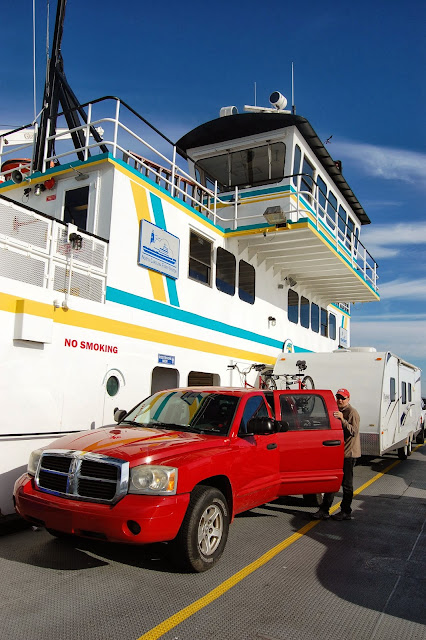 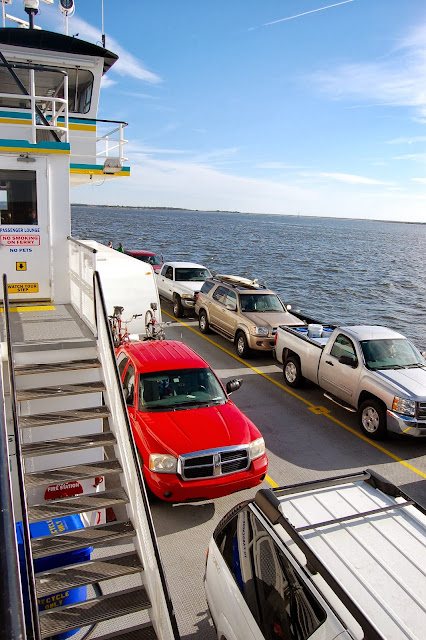 Our kids enjoying the ride! 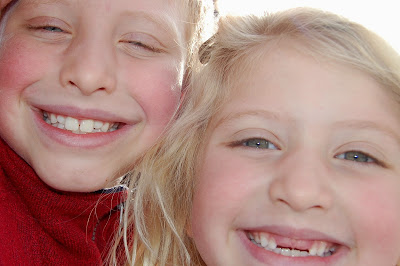 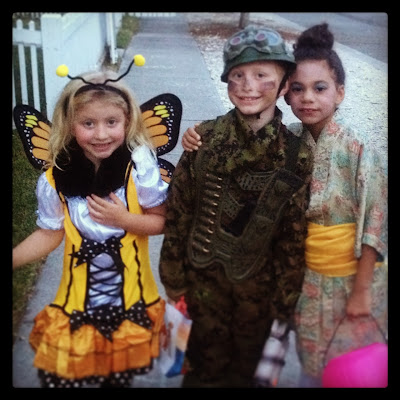 The Monarch Butterfly, Navy Seal, and Geisha Girl wish you a Happy Halloween.
Posted by Shanna at 8:05 PM No comments:

Perk of Camping at the Fairgrounds

..... on the last night of the North Carolina State Fair. Jonah got to
watch the fireworks from his bunk. Elisabeth, who really dislikes the
noise, was thankfully sound asleep. 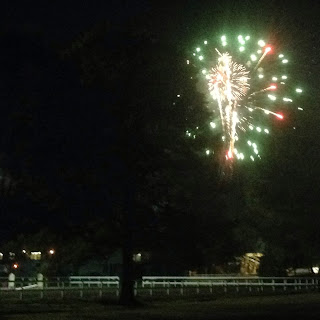 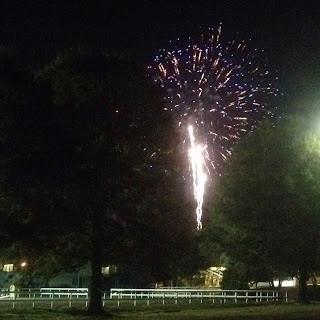 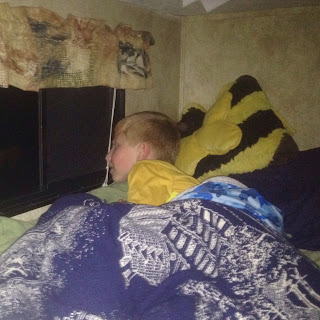 Posted by Shanna at 9:01 AM No comments:

These were taken in and around Gros Morne National Park, Newfoundland in August/September 2013.

Posted by Shanna at 2:33 PM No comments: