Homeschooling: Getting Help When and Where You Can


My recent attempts at “homeschooling” have led to frustration for me and for Jonah. Being an active and imaginative, left-handed boy, and, subsequently, very right brained, he doesn’t do well with traditional learning environments (to understand why keep reading). Sitting at a desk for long periods doing worksheets is not going to work for him. So, how do I approach homeschooling as the instructor when that is mostly what I remember school to be?

When a chance encounter presented me with the information about a homeschool conference, I couldn't resist. With my past experiences in mind, I had some very specific questions going into the conference.
The conference I attended was put on by Heart for Homeschool. It was fairly small and informal, which suited me just fine. While some of the initial sessions were anecdotal in nature, they helped me realize that every homeschooling mom will have struggles and challenges, and not just at the onset.

The Thing about Right-Brained Learners....
One of the best sessions was something to the affect of “Tips and tricks to teaching your right brained child.” During this session, I learned the difference between auditory, visual, kinesthetic, and tactual learners (I suspect Jonah is primarily a kinesthetic learner.) The session leader also brought up the importance of brain integration therapy for those right-brained learners and recommended resources by Diane Craft. Basically, everyone is primarily left or right brained – usually revealed by being right or left-handed, respectively. Right-brained individuals process information differently than left-brained individuals. (One consolation: historically, most inventors, presidents, and overall those who have been deemed to have a genius intellect have been left-handed and right-brained.) Brain integration activities train the right and left lobes of the brain to work together more affectively, thus overcoming what can be perceived, particularly in a traditional classroom setting, as a learning disability or deficiency.

I'm not exactly sure of the relationship between brain dominance and brain integration. However, I took note of all the brain integration stuff because my husband had been reading about it simply as a topic that intrigued him, and, as a result, was trying to convince me not to neglect handwriting instruction with Jonah.

One of the most rewarding aspects of the conference was the opportunity for newbies like me to hear stories and get tips from those more experienced than I. There were break out groups where I was able to ask my questions directly to those who have gone before. Here is a summary of what I learned:

First of all, in regards to handwriting, some moms felt that handwriting wasn’t a big deal and waiting was fine, while others subscribed to the importance of brain integration therapy. Moms at both ends of the spectrum recommended Handwriting Without Tears (HWT) as a resource that I should look into. It’s nice to know I’m not the only one who has struggled with teaching handwriting! The bottom line is to discern what works best for you and your family. My husband and I believe there is probably something to this brain integration therapy and, after some research, have decided to begin handwriting instruction via the methods used in HWT.

When asked about daily instruction time, most moms said a maximum of 1.5 to 2 hours for young kids like mine and, when working on something intensive, to break it down into 10 minute intervals with a more fun activity or lesson in between.

On the issue of curriculum, I heard several mothers rave about a curriculum called "Five in A Row”. What really got me excited about this curriculum was upon hearing how much fun the moms had in the process as well as the multi-cultural aspect. The curriculum is essentially a reading list where you focus on one book a week and go through as many related exercises as you feel are appropriate – everything from art, to geography, to math – with the book as the foundation for those activities.

The biggest one-line take away for me from the conference was, “Don’t try to recreate the classroom at home.” As I was publicly schooled in traditional classroom settings, I needed to hear that, so I could be free to brainstorm and envision sitting on a blanket in the back yard, sitting in the living room on the couch, on the floor, sitting on a bed, or at the kitchen table.

As a result of this conference, I feel like I have more tools, ideas, and encouragement and I really needed all three.

School is in session!

Who Needs Toys! Give Them a Box

Version 1 - Outdoor lean-to: proves to be too unsteady in the wind 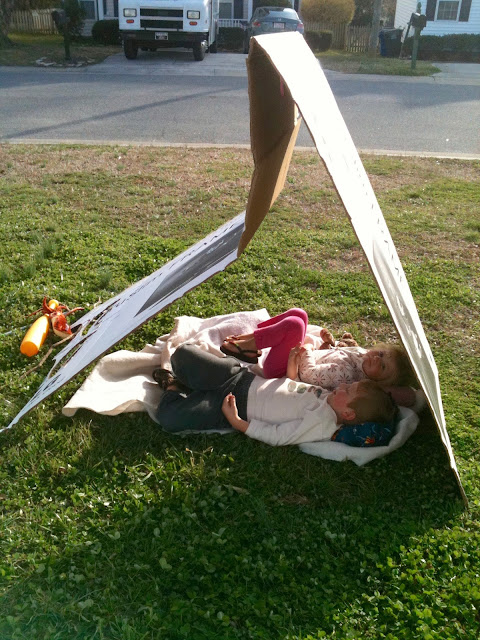 Version 2 - Makeshift playhouse: withstands the wind but not the neighbor boy 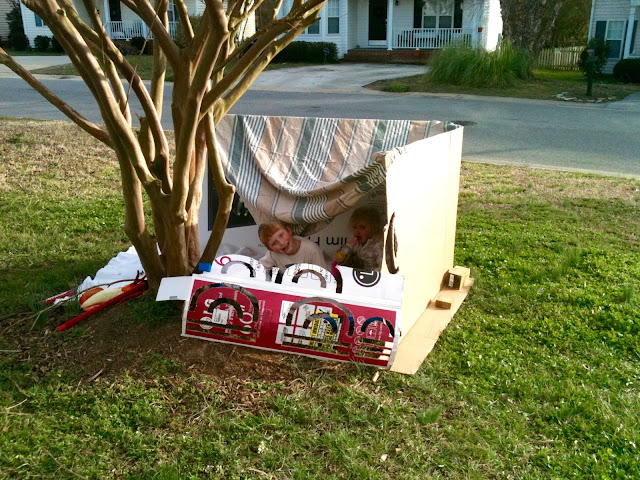 Later they (including the neighbor) lay the box out flat and use it as a slide.

There is no better plaything than a big box.
Posted by Shanna at 9:41 AM No comments:

So back in August I posted about our RV and how I wanted to give it a name. We were on our first big trip with it at the time - visiting Bar Harbor, Maine. We received several name suggestions and I was just about to announce the name we had chosen when...... Hurricane Irene happened. The weekend we were to drive back from Maine, Irene hit North Carolina and slowly churned north. We decided to leave Maine as planned and divert our path west into Pennsylvania in an attempt to skirt around the storm.

Well, during our visit in Maine we discovered there was a small leak in the RV and then on the overnight we spent in Pennsylvania as well as a few rest stops we realized that there were more leaks everytime there was a heavy downpour. Well, water leaks in an RV are not good! Generally speaking RV's are made to be light weight which means the walls and floors are mostly fiber board which are easily damaged by water. So on our return trip home Kelly jokingly says, "I thought of a name for our RV - Irene." To which I reply, "Absolutely not."

So we get home and in the weeks after Maine we begin the process of trying to repair the leaks. The first quote we get is outrageous and we have a day or two where we feel like the sky is falling because we bought a lemon of an RV. During this time, I actually start referring to the RV as - you guessed it - Irene.

But then, we find an RV repairman who assures us he can fix the seals and make some adjustments that should take care of the leaks for a fraction of the cost that the dealer's servicemen quoted us initially. Thank God! (Big lesson here: RV dealerships want to sell you new RV's and don not really care to fix your older model RV.)

There doesn't appear to be any water leaking now and we have had several rain storms with driving rain since the repairs were complete. So now we are again looking forward to many more adventures in our RV. Now that we know it's not a lemon after all, we have given it the name that we wanted to give it several months ago - the OUTLANDER.

No one chose that name in my poll, but Kelly and I both thought of the name separately and have agreed it's the right one. We met in college while attending activities in an outdoor recreation club called Outlanders. We weren't the only one's to meet as participants of this club and then get married, but hopefully my friends won't mind our use of the name (you know who you are). After nearly 14 years of marriage, we have rediscovered one of things that brought us together in the beginning.

God willing, we will be enjoying many more traveling family adventures with our Outlander. 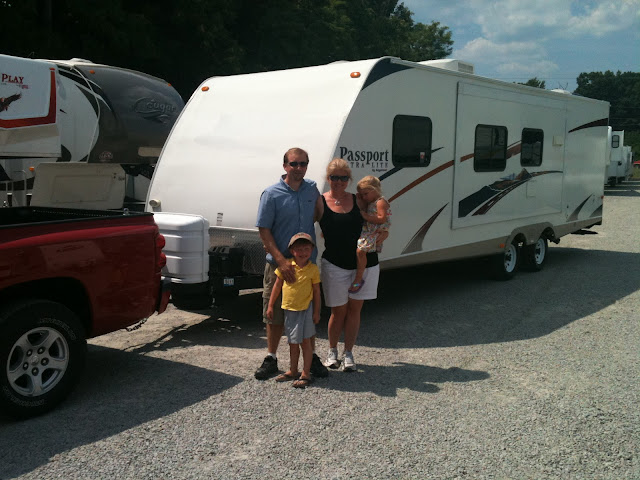 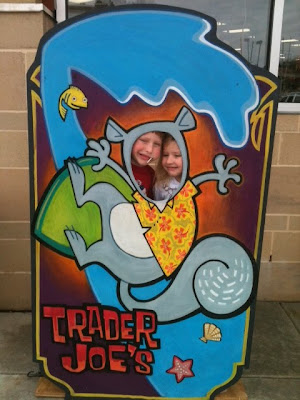 usually involve a trip to a grocery store. Today's selection was...
Posted by Shanna at 4:26 PM No comments:

A Beautiful Day at the Museum 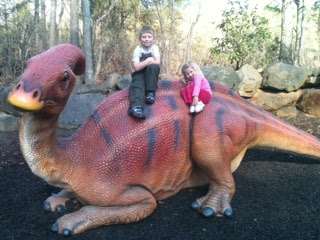 I don't know about Mr. Woodchuck, but we've seen our shadow all day at
our favorite local museum.
Posted by Shanna at 2:30 PM No comments: