Our First Taste of Scotland 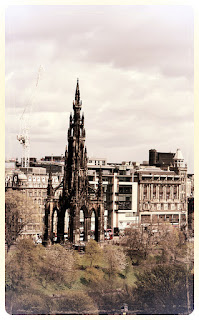 On this day one year ago, we visited Edinburgh Castle. The castle, with it's restored interiors and sweeping views, is awe inspiring to say the least. There was so much to see from a Military Museum of the Royal Dragoons to the Scottish Crown Jewels and the Stone of Destiny.

All this wonderment came on the heals of a marvelously full day spent exploring the expansive ruins of Hadrians Wall, driving through Northumberland National Park, and our first views of ruined gothic abbeys.

We got a general feel for Edinburgh on the public bus ride to downtown. But other than the Sir Walter Scott Monument, which is hard to miss, we didn't take the time to see much else in Edinburgh. We finished up at the castle in the early afternoon and rode the bus back to our hotel. Needless to say, by this point we were ready to slow down a pace. So we drove to a mall for dinner and a movie - Avengers: Age of Ultron no less which was released a week early in the Great Britian. We all enjoyed the much needed respite before continuing north the next day on our driving tour of Scotland.

Posted by Shanna at 9:54 PM No comments:

A year ago today we were bundled up and occasionally getting pelted with sleet as we visited our first British Castle in Carlisle, Cumbria. We were introduced to the story of St. George and the dragon when our then 8 year old was able to participate in a reenactment of the story. This was also the first place we saw obvious indications of Roman occupation of this area. Stones from earlier Roman structures, including those inscribed with Latin, were used in the construction of Carlisle Castle.

However, it was on the following day that we really got a taste of the Romano-British era as we followed Hadrian's Wall on what was once a Roman road. We stopped at several major forts like Housesteads as well as smaller roadside mileforts along the route.

These couple of days were some of the most amazing and memorable. Of all the places we visited, this northernmost area of England is right up there with London in priority for a return visit. I would love to explore this area on foot one day.

Posted by Shanna at 1:36 PM No comments:

Great Britain: A Vacation to Remember

On this day last year, we were on our way to Great Britain for the vacation of a lifetime. During those first few days, we visited historical sites the likes of which I had never before seen: Avebury, Stonehenge, and Old Sarum among them. We wore ourselves out trying to see and do as much as we could during our two weeks in-country. Our pace was exhausting, but it was so amazing! I will be taking time to reminisce over the next couple of weeks and sharing photos and videos that I just didn't get a chance to share last year.

Posted by Shanna at 7:34 PM No comments:

Homeschool Day at the Florida Museum of Natural History

We recently attended a homeschool day at the Florida Museum of Natural History in Gainesville. Most of the museum is free to visitors with the exception of the Butterfly Rainforest and the First Colony: Our Spanish Origins exhibit. During the event, a small discount was given for the Butterfly Rainforest and different stations were set up for homeschoolers to learn about butterflies and moths. Some of differences between butterflies and moths were already known to my 7 and 9 year old students, but being able to look at a moth wing and butterfly wing under a microscope was unique. As a result, they will forever remember that butterfly wings have scales and moth wings do not. They were also able to pot their own milkweed seedlings to bring home, and they learned how to properly pin butterflies for preservation from a professional lepidopterologist. 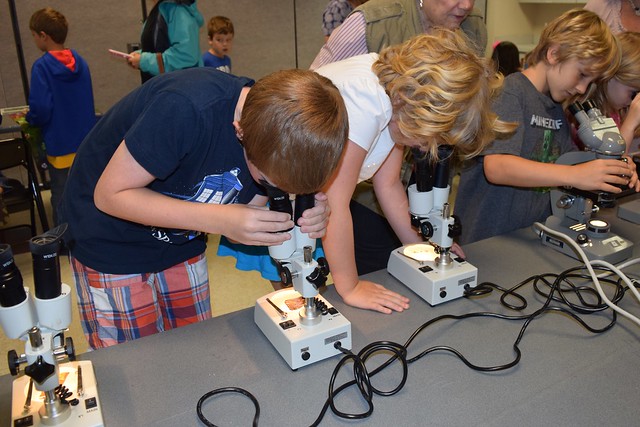 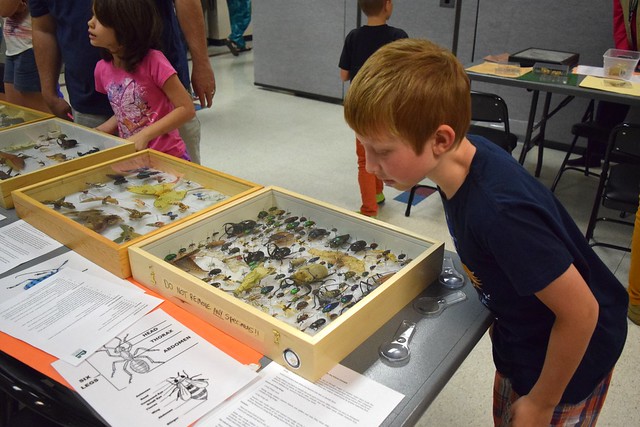 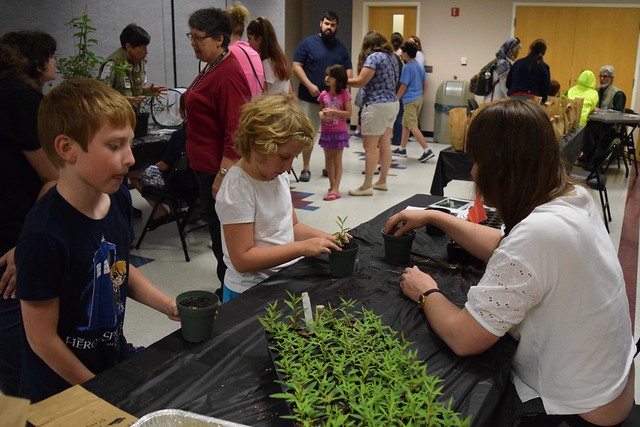 Patrons can enter the Butterfly Rainforest more than once during a visit to the museum. It was a good size with a number of different butterfly species floating and flitting around. We were told that this museum hosts one of the largest collections of butterfly specimens in the world. 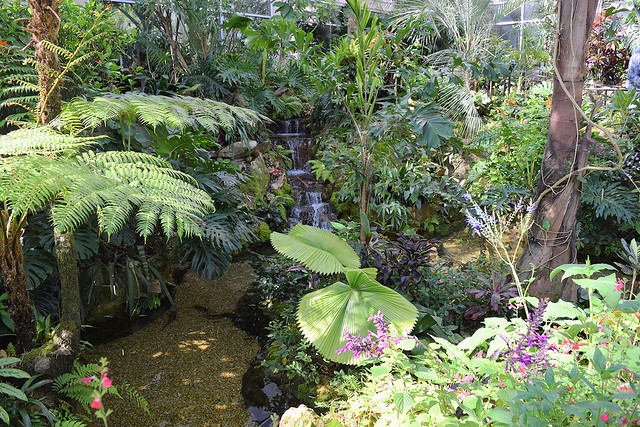 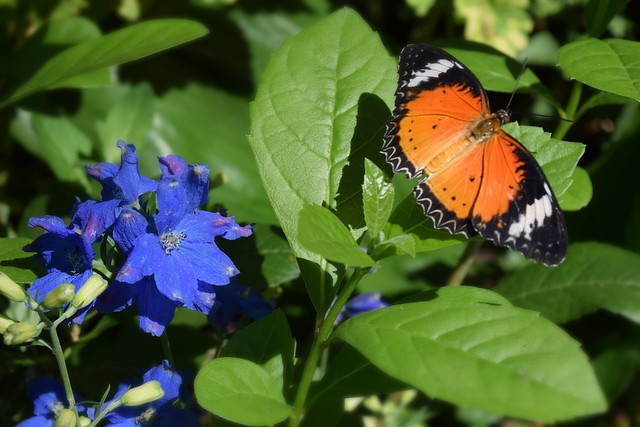 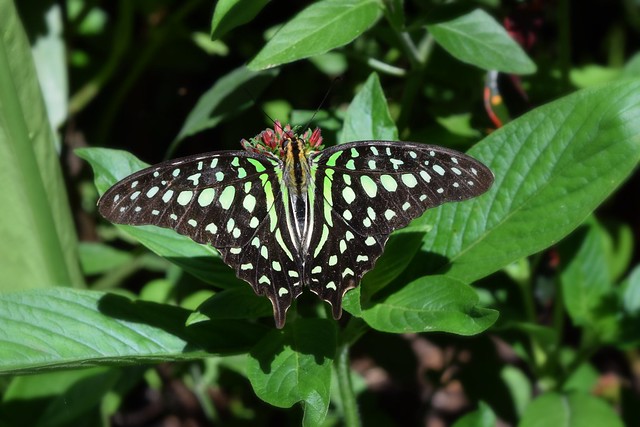 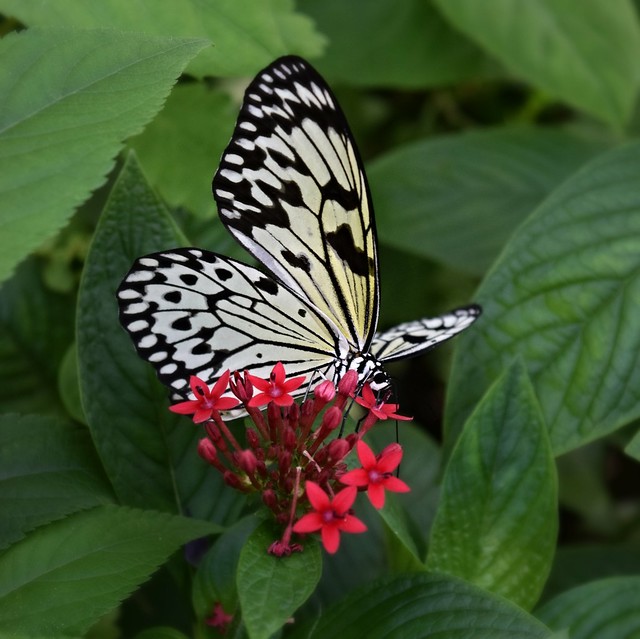 There is plenty to see at this museum beyond the butterfly exhibit. We were amazed at the elaborate displays of prehistoric fossils, Florida habitats and mannaquined exhibits of native peoples - all that is free! 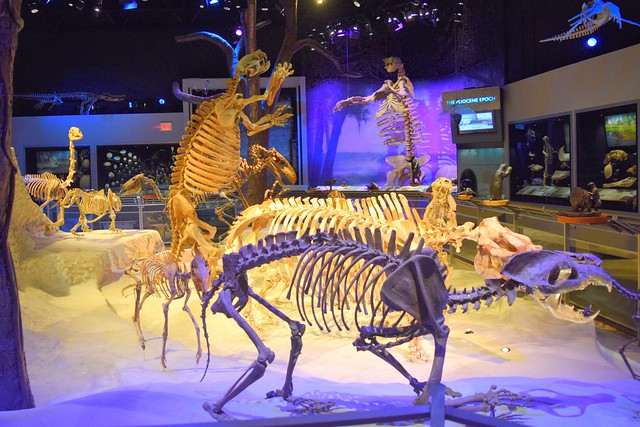 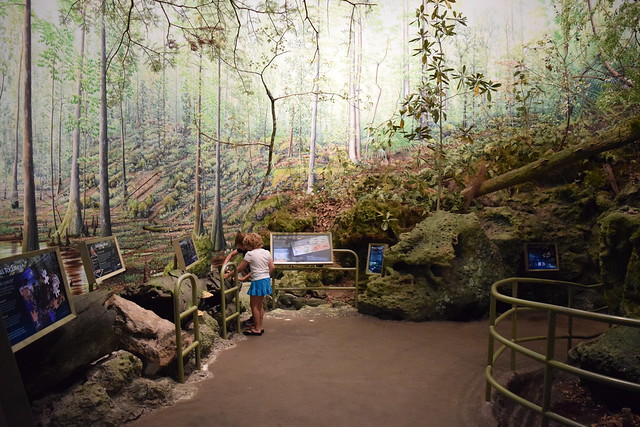 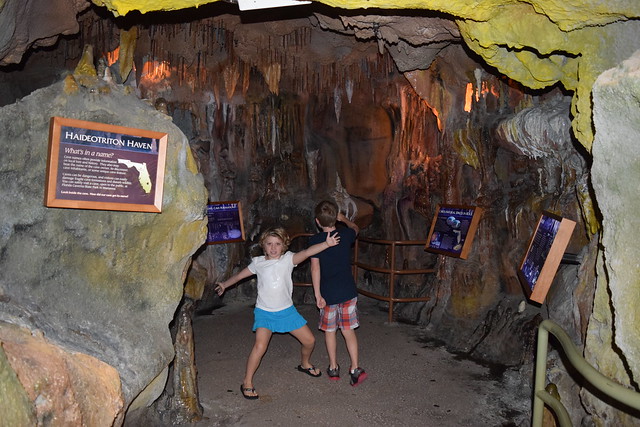 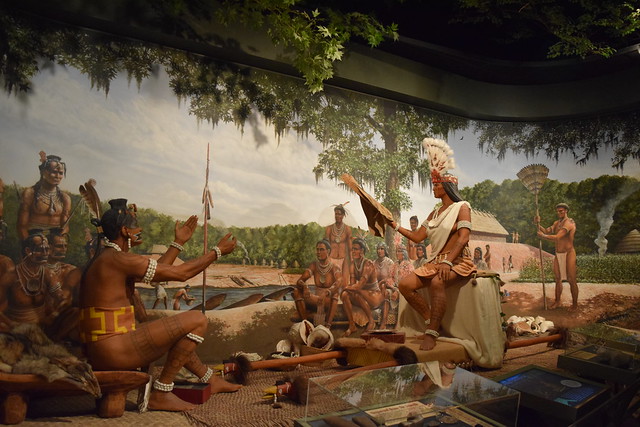 This event prompted a weekend visit to the area and a camping trip to nearby Paynes Prairie Preserve State Park. Using the campground as a base, we were easily able to visit this museum as well as the Harn Museum of Art located right next door on the University of Florida Campus. 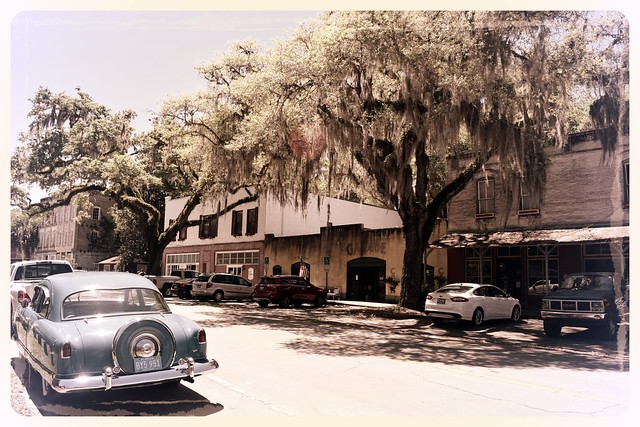 The rustic sign for Historic Micanopy (mick-a-no-pee) is directly off the I-75 exit on the way to Paynes Prairie Preserve State Park. Our curiosity peaked, we decided to check it out and happened upon the quaintest little example of "old Florida" that I've ever seen. We skipped the Micanopy History Museum during this visit but learned a bit from the historic markers located around town. This area was used primarily to free range cattle by several subsequent tribes of Native Americans, from Timicuan to Seminole. In fact, the Cholokka Blvd, which is the main street of Micanopy, was once an Indian Trade route and is on the National Register of Historic Places. Today, the main street is lined with grand oak trees and old store fronts which house antique shops, cafes and art studios. It was a lovely spot for a stroll and a scoop of ice cream. 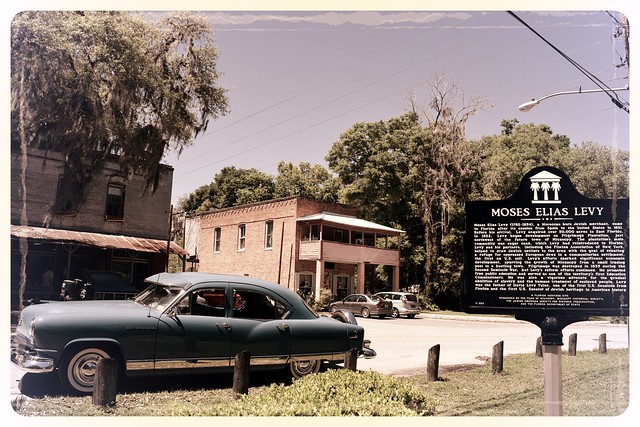 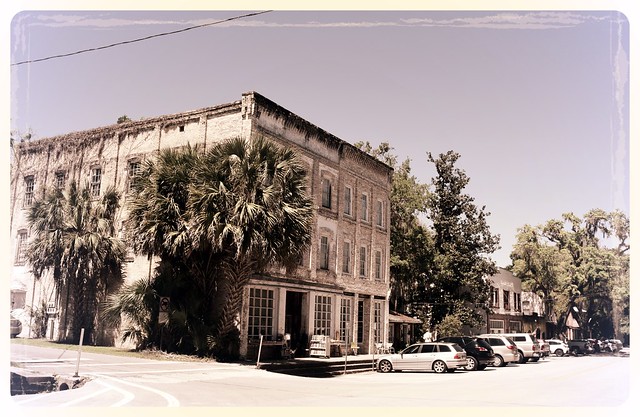 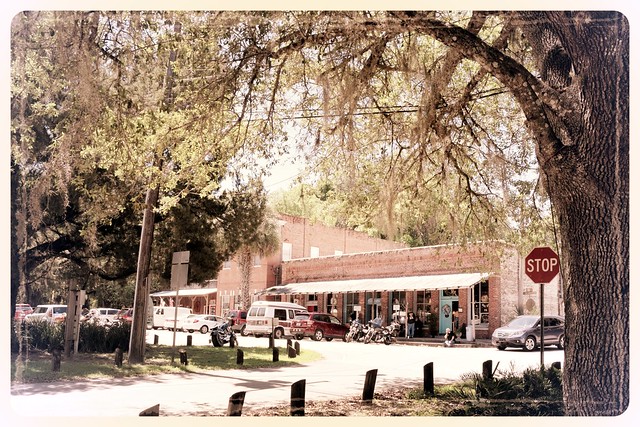 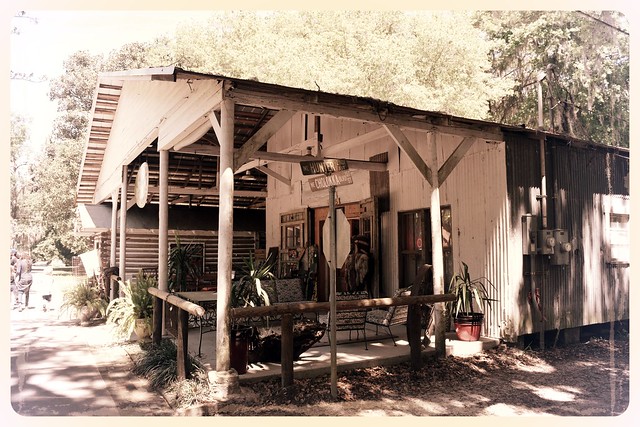 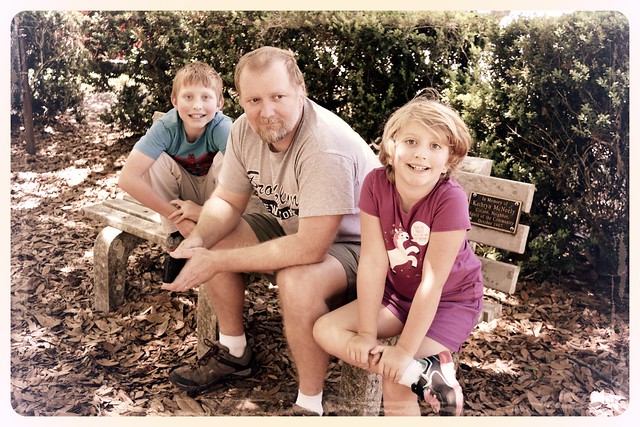 Established in 1974, Paynes Prairie Preserve State Park was Florida's first state preserve. Paynes Prairie encompasses more than 20,000 acres of savannah near Micanopy, Florida, a few miles south of Gainesville on I-75. We recently spent a lovely weekend RV camping in the park and using it as a base to explore the area including Historic Micanopy and the Florida Museum of Natural History.

There are numerous trails in the park for hiking, biking and horseback riding. We did a little biking along the south side of the prairie as well as a section of the Gainesville - Hawthorne Trail that traverses the north side of the park. During our visit, the herd of American Bison made an appearance near the observation tower and we were able spot wild horses through the binoculars. Paynes Prairie has a lot of unique features that make it worth a visit. Add in the park's proximity to I-75 and Gainesville and you have a fun yet relaxing get away.

Families choose homeschool education for their children for many different reasons. The rationale behind our decision began predominantly with the arguments expressed in a collection of essays put together by John Taylor Gatto. My husband and I were introduced to his book, The Underground History of American Education, before we had children. It opened our eyes to some underlying precepts in the public school system with which we assuredly did not agree. Our own negative public school experiences support his assertions and helped cement our decision to homeschool.

One of the more salient points that Gatto makes is that when you look at the history of government-run, compulsory education, the original intent was to cultivate good factory workers who easily conform to a schedule and meet production goals. Most people would agree that this doesn't make much sense in our modern American society yet the public school system has changed little over the years (except to perhaps become more confining, restrictive and monotonous).
I feel strongly that everyone in the world regardless of class, gender, race, culture, religion, etc. should have access to free education. In the absence of other options, government-run, public education can be a good thing. But, given the availability of time and resources, a homeschool education is often better.

Sir Ken Robinson has the number one most watched TedTalk, "Do Schools Kill Creativity?" A whiteboard presentation of another of his talks called "Changing Education Paradigms" (embedded below) clearly demonstrates our issues with public school.

Posted by Shanna at 1:27 PM No comments: