Our Halloween fun began with lunch at Chick-fil-a (free kid's meal with purchase) for any dressed-up kids. Then Elisabeth had a party at dance class. After a trip to the grocery store, we came home for dinner with the Carr Family (sans Papa Carr) and then went trick or treating on our street. The kids had a great day as you can see. Samuel was a hoot during the trick or treating. Jonah had to show him the ropes since it was his first time.

Last year, we attended the Fall Festival at a Providence Baptist Church. Because we had such a good time last year, we decided to go again this year.

Jonah went as Ironman and Elisabeth as a princess (of course).

Elisabeth rode a pony again this year, and, once again, Jonah didn't care to.

They both enjoyed the giant slide....

Kudos to Providence for putting on such a great event for the community.
Posted by Shanna at 9:07 PM No comments: 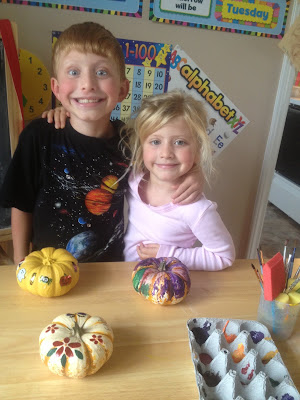 Posted by Shanna at 3:21 PM No comments:

Email ThisBlogThis!Share to TwitterShare to FacebookShare to Pinterest
Labels: Autumn

After our big day trip to Devil's Tower, we got up before dawn the next morning and headed into Custer State Park. We knew that the early morning was our best chance to see the most wildlife and we wanted to get to the more remote areas of the park around sunrise. I am so glad we did! This was the closest thing to being on Safari that I have ever experienced. We saw lots of bison, a big herd of elk, coyote, wild burros, huge prairie dog towns, dozens of pronghorn, deer, and wild birds of every sort.

Here are some related articles that I enjoyed: 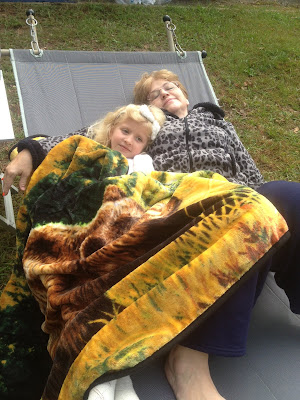 Posted by Shanna at 9:35 PM No comments:

Playdate at the Museum

The kids met their buddy Wilson at the Durham Museum of Life and Sciences on Friday. We had a great time. Hopefully, the next time we go, the Alpacas will have arrived. 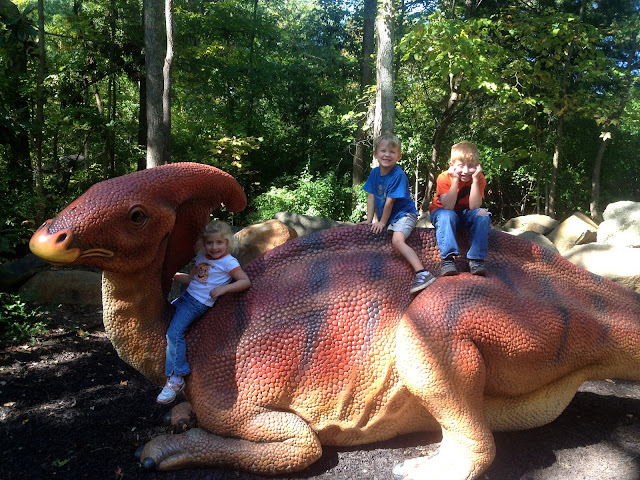 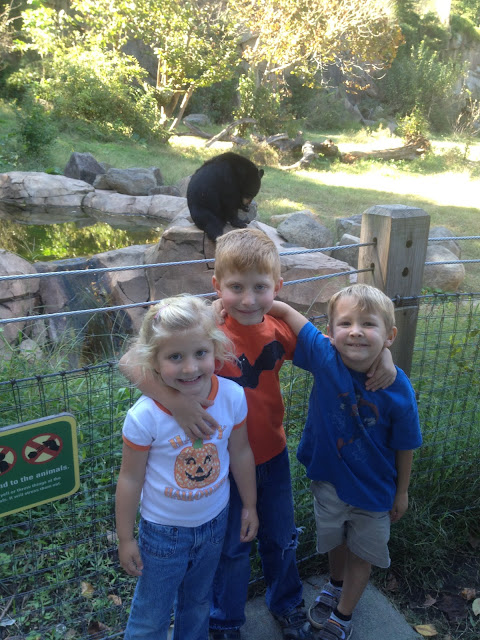 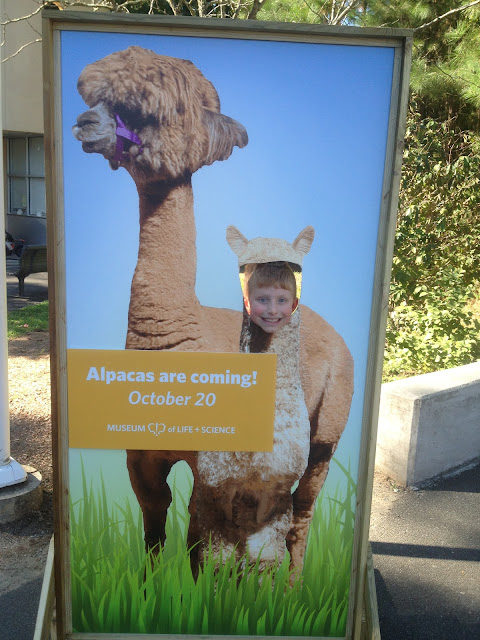 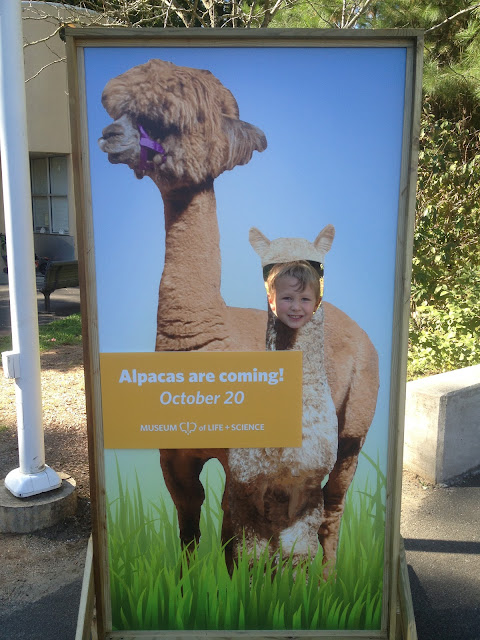 A picture we took on our trip out West got the attention of a new online "social travel platform." A representative from Touristlink.com contacted us requesting permission to use a photo we took of our campsite at the Lewis and Clark Recreation Area (which I included in a recent post.) They want "really good pictures" of featured destinations, and, apparently, our photo fit the bill. Honestly, it's not all that, but it does capture the essence of the campground which was my original intent in taking the photo in the first place. Regardless, I thought it was kind of cool! Posted by Shanna at 7:10 PM No comments:

Homeschooling from the Heart with Help from Lewis and Clark

Where history and geography are concerned, I'm finding that both Jonah and myself learn better when we have some context. While on our RV trip to South Dakota last month, we ended up visiting many of the places along the route of Lewis and Clark on their journey up the Missouri River with the Corps of Discovery. The more I saw of the area where they traveled and the more interpretive signs I read, the more interested I became in their story and the more I realized how amazing their journey really was. Of course, when I learned something new I would relate it to the kids.

The book is factual, well written, and, I, for one, found it most interesting and yes, informative. While I had a vague notion of who Lewis and Clark were, I really knew little about the details of their journey or how truly significant it was. I did not realize the scientific endeavors of their journey other than they were the first non-Native Americans to see huge herds of Bison. So this adorable little book, which is based on actual events, describes how Lewis and Clark were instructed by Thomas Jefferson to collect plant and animal specimens along their journey. They discovered prairie dogs on their trip and decided to send a live specimen back to the President. They had nearly all their companions try to flush out or dig up a prairie dog. Finally they succeeded by flooded on out of it's burrow with buckets of water. What a great story and it's true!

When we returned home from vacation as I attempted to get us into a homeschool routine, I started using our experiences as a guide and got a couple of Lewis and Clark books from the library. I also looked online for crafts and ideas for how to reinforce and add to what we learned on our trip. Here are a couple of resources I found on-line (there are many more):
As I was reading a couple of these, I realized we could go on our own journey and re-create, if you will, Lewis and Clark's journey. So we packed up a couple of backpacks and set off to the greenway near our house (which happens to go along a river!). 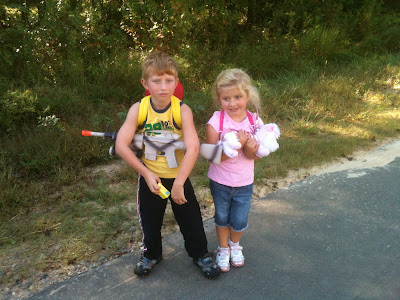 As you can see, we have a gun to fight off the grizzly bears; the expedition encounter several once they reached present day Wyoming. The pink, poodle purse is the stand in for the big, black Newfoundland dog that Meriwether Lewis brought along on the journey - he threatened to burn down an indian village because they stole his dog - he got it back! (The natives considered cooked dog a delicacy). We brought cameras to take pictures of wildlife (because modern exploration requires it), but we also brought along pencil and paper to draw pictures of the plants and animals we saw along the way.  These included a dead vole, a dead frog, several birds, and a 5 foot long black snake that was very much alive (I had the heeby geebies the whole rest of the walk after that.)  At one point we saw a big black beetle and we stopped so Jonah could draw a picture of it.

We finally found a good spot to make camp..... 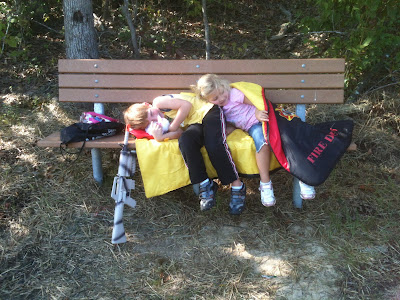 ....and have a snack before continue on the the playground.

When we got home, we watched a 41-minute National Geographic documentary called Lewis & Clark: Great Journey West (2002) while we ate lunch. It was the perfect documentary for my kids, because it wasn't too long and was a reenactment of their journey (and not just images with a narrator). Not only that, but Jonah recognized the boats they were using in the documentary as the very boats we saw at the Lewis and Clark State Park in Iowa. As we were watching the documentary Jonah says, "That's what those benches were for!  Not for sitting but to stand on and push the boat with poles." While the members of the Corps of Discovery probably did sit there, Jonah learned one of the ways their boats were propelled forward against the fierce current of the Missouri River.

Since that documentary, we have also been watching the Ken Burn's documentary, Lewis and Clark: The Journey (1997) but, in piecemeal, as it is 120 minutes long. (Both documentaries are currently available to watch on-line via Netflix). While this film is more for my benefit, the kids stick around and watch it with me for the most part. It has many more details in it, of course. The funny thing is I tried to watch this a year ago and couldn't get through the first 15 minutes - I just didn't find it interesting. Now I'm thoroughly enjoying it. This is quite a lesson for me as a "teacher" and exemplifies the fact that we learn better and more easily when something has triggered our interest and captured our imaginations and travel can be a catalyst in this process. As a result, these last couple of weeks of homeschooling have been great! Fun for me and for my kids. This, I can do!

Chick-fil-a and Mimi the Clown

I must confess we frequent Chick-fil-a establishments: wifi, free refills, playground and good, reasonably priced food - how can a mother resist - seriously! Oh and pretty awesome employees for the most part too. Anyhoo - we don't go in the evenings much, but, yesterday, it just worked out for us to make it to the Kids Night at one of the Chick-fil-a's near our home. Mimi the Clown was the highlight of this particular Kid's Night (the Chick-fil-a Cow also made an appearance.)

Here is Mimi the Clown working her magic. She asks the kids what they want to be. One boy wanted to be Iron Man, another a zombie, a girl asked to be a rainbow princess, another for Hello Kitty. Elisabeth simply asked for a Princess face.

Jonah didn't want his face painted but got balloons - a pirate sword, with belt and parrot. 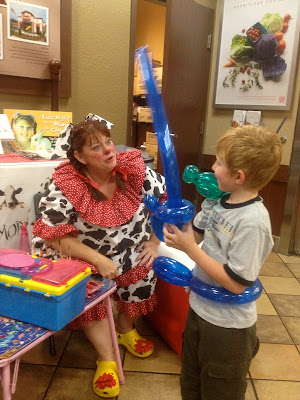 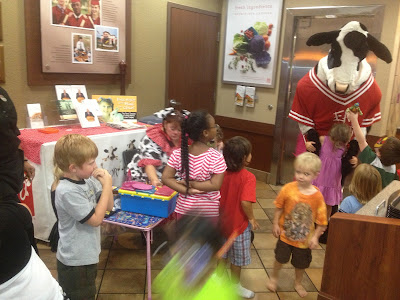 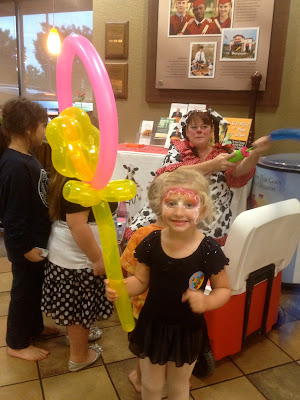 To find out when Mimi will be at a Chick-fil-a near you go here.

For information about getting Mimi for one of your events, check out the Melody Maker website.

The Delight of a Child (and her Mother)

On our return home from our recent trip out west, we were driving down the Great River Road along the Mississippi when we opened the windows to enjoy the early evening air. Through my side mirror, I was able to witness the delight of my baby girl as she was fully intent on enjoying the feel of the wind on her face. And her joy was made mine..... Jesus said, “Let the little children come to me. Don’t keep them away. The kingdom of heaven belongs to people like them.”  - Matthew 19:14

Posted by Shanna at 1:21 PM No comments: