An Island Cruise to Frenchboro

Sunday, we took an informative cruise with Island Cruises out of Bass Harbor to Frenchboro. We skirted a few other islands as well and got to see the Bass Harbor Head Lighthouse, seals, and a few harbor porpoises. Our captain pulled a few lobster traps and did a great job of informing us about the culture and family tradition surrounding the lobster industry as well as some of the history of the area. We found it to be absolutely fascinating. 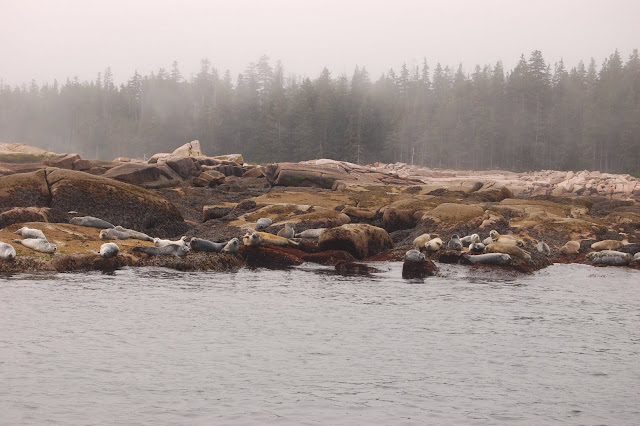 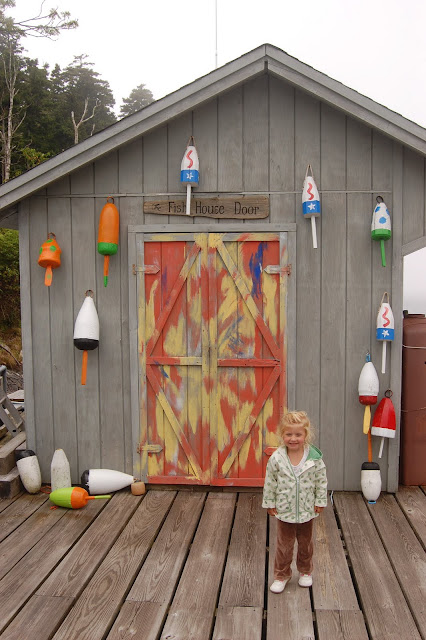 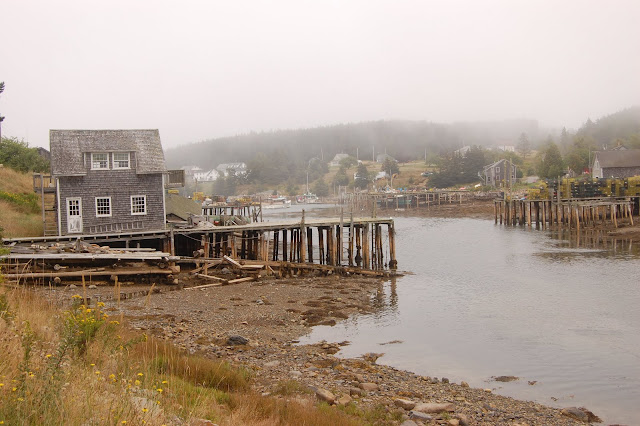 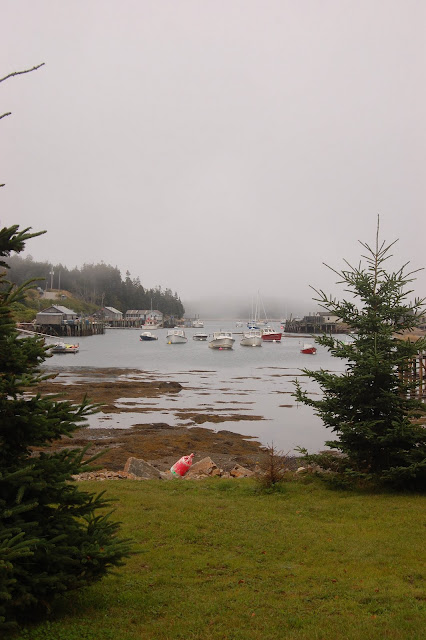 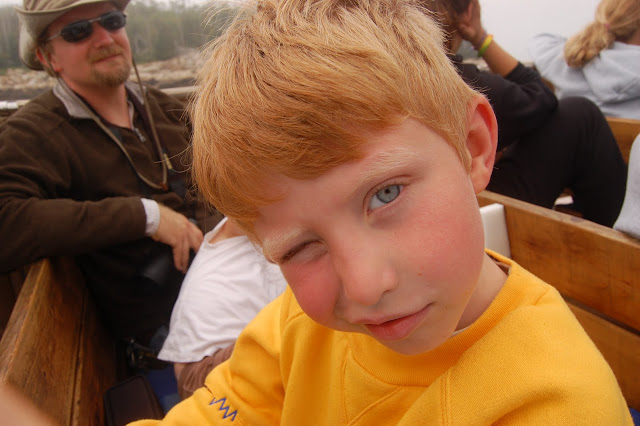 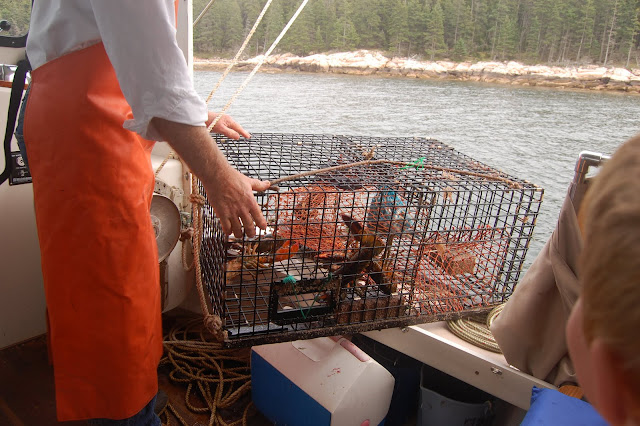 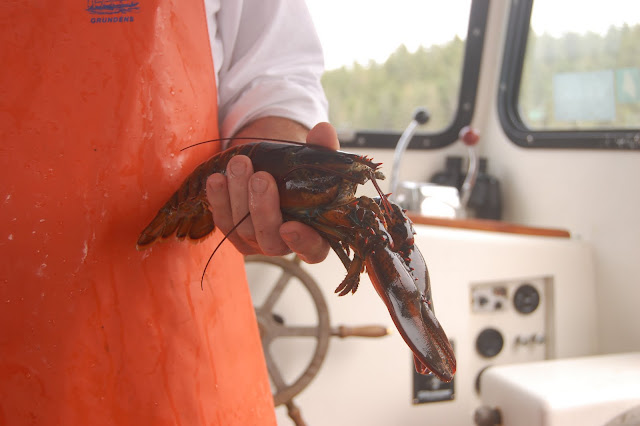 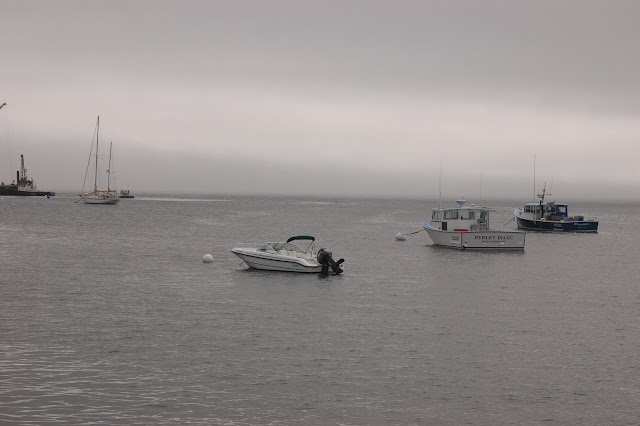 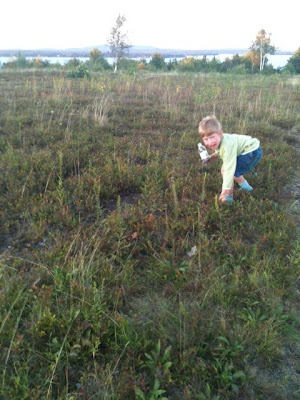 There are fields all around the campground. A fun campground past time.
Posted by Shanna at 7:22 PM No comments:

A Name for our RV

I want to name our RV.  Just for fun, I have put a poll on this blog on the right to see what name you prefer.  We had several suggestions including:

Monday was officially our 13th wedding anniversary. Ironically, we both got confused thinking the 15th was on Sunday (thus my early post).

To commemorate, I thought we would go somewhere and order lobster since we are in Maine and I don't recall ever eating lobster. Unfortunately, we were all still tired from our long drive so we just went to the closest restaurant that advertised a family atmosphere - The Log Cabin Restaurant.  After walking in I doubted the wisdom of our choice, but we followed through with our plan despite the greasy atmosphere. 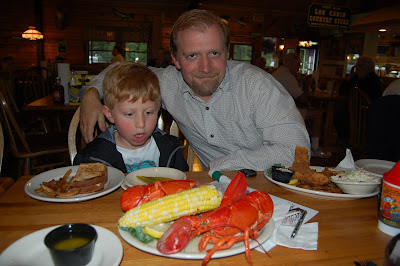 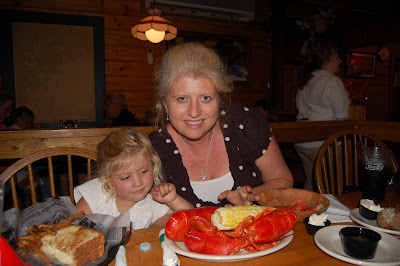 We ordered a twin platter and got the tutorial from the waitress on how to crack open the ruddy crustaceans. We cracked, pulled, dipped and ate. I was glad to commemorated the occasion with a new experience, but honestly, I don't like lobster.  So for me it's just not worth forking over the market price for something that just isn't that appealing. The fried fish however was yummy! I think I'll stick with fish, at least until my next anniversary!

This afternoon I took the kids to the Mt. Desert Island Oceanarium to learn about lobsters. Honestly, it was a bit overpriced ($22 for me and J, E was free), but I learned a lot, and the kids enjoyed the touch tank.

Between this stop and the Touch Tank Talk by a ranger at the Dorr Museum on the campus of the College of the Atlantic, Jonah has learned a lot about sea stars, sea cucumbers, crabs, etc. this week - a
perfect example of unschooling. It's amazing how much he picks up even when I think he's not paying attention.

Here he is holding a star fish. He learned that they have eyes at the end of each arm and they eat by throwing up their stomachs. Pretty cool stuff! 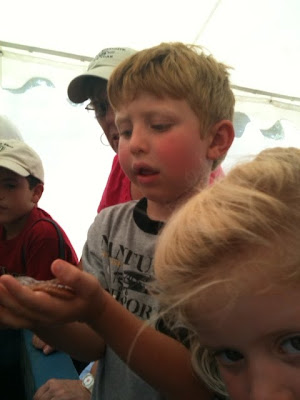 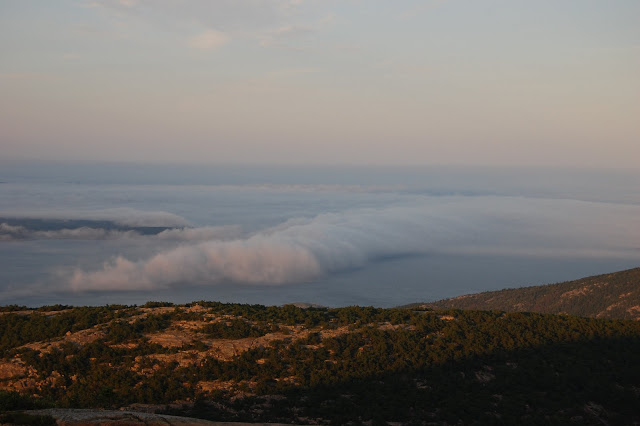 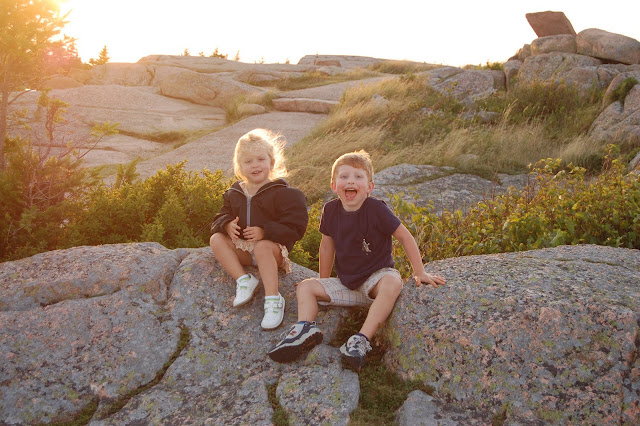 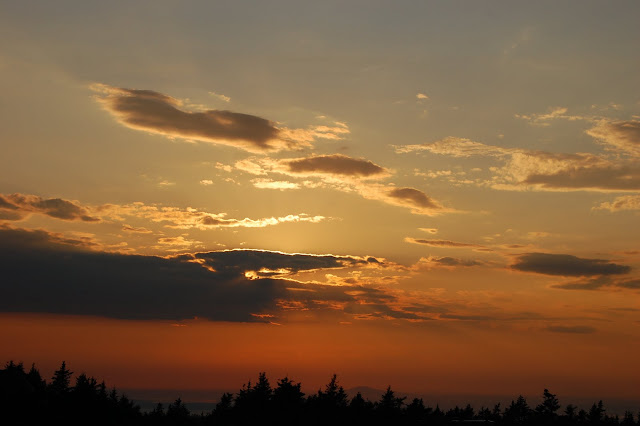 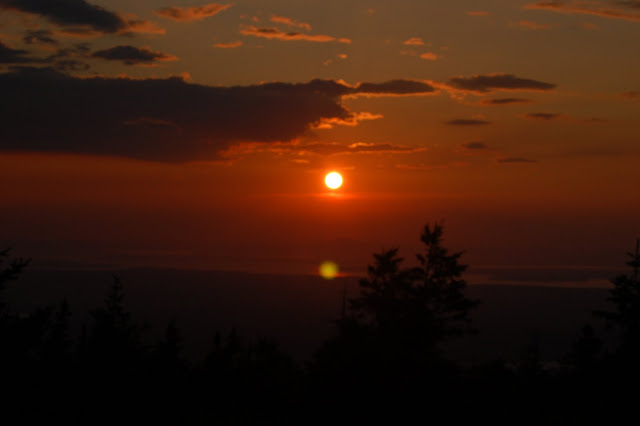 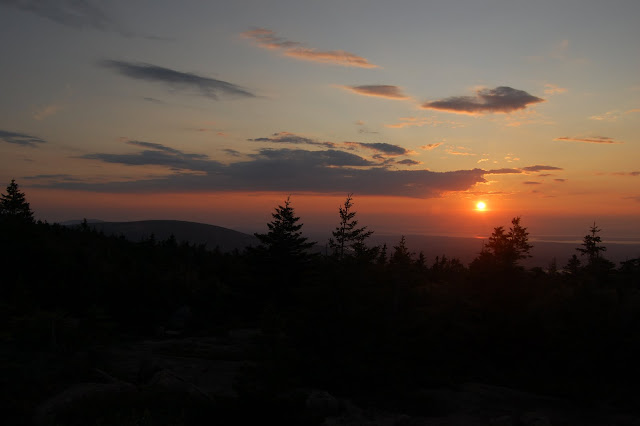 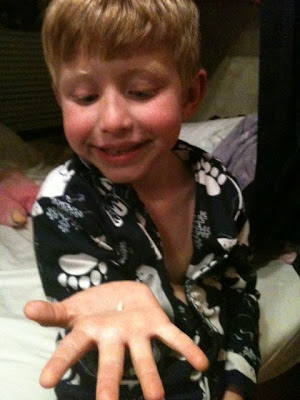 It seems like Jonah's baby teeth like to fall out when we are away
from home. He lost his second tooth today. We managed to get it under
his pillow without losing this one. So I guess we'll be getting our
first official visit from the tooth fairy tonight!
Posted by Shanna at 8:57 PM 1 comment:

Here's my blogging spot this morning. 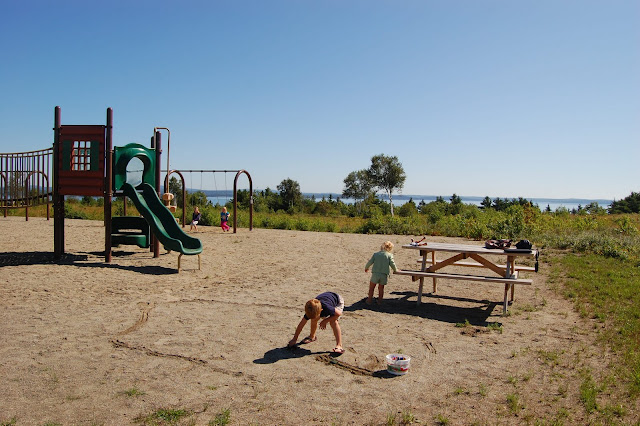 I'm sitting at that picnic table while the kids play at the playground. We arrived Sunday afternoon after what seemed like a very long drive from home. We left Friday afternoon and stopped in Pocahontas State Park overnight. We pulled out from there around 8:30 Saturday morning driving through D.C., Baltimore and yes, even New York City!  That was a bit hairy!  (We've already devised a route to bypass NYC on the way home.) We made it to Manchester, CT just out side of Hartford Saturday night where we boon-docked in a Sam's Club parking lot.  We got up around 6:30 a.m. and continued our trek north on I-95 and finally made it to our campground on Mt. Desert Island in Maine around 4 p.m. Sunday. When we arrived and got set up, Kelly said, (and I quote) "I can't believe we finally made it."  Apparently he had some doubt we could pull our RV so far and arrive in one piece.

We set up on a site with full hookups (water, electric & sewer), but we weren't 100% satisfied with the location. So Monday, we scoped out another site near the pool, playground and laundry mat and moved the RV.

I took the kids out sight-seeing a little bit Monday afternoon. (I'll blog about Monday evening later.) It  rained overnight Monday and into Tuesday so I drove into Bangor and took the kids to McDonalds and The Maine Discovery Museum.

Today is warm and sunny so we're planning a picnic on Cadillac Mountain and then some pool time here at the campground.

Jonah and his Ride

Posted by Shanna at 1:28 PM No comments:

Dress up is big around here these days especially with Elisabeth, but Jonah likes to join in at times too. Elisabeth is usually a princess or fairy or something, while Jonah's costumes can be rather diverse. In this case, snow boots, ranger badge, sleeping bag back pack and safari hat make for a perfect park ranger. Email ThisBlogThis!Share to TwitterShare to FacebookShare to Pinterest
Labels: dressup

After the whirlwind sightseeing tour the day before, we really needed to slow things down for the kid's sakes as well as our own. So we did what any red-blooded American family would do with two small kids, we went to McDonalds. Two happy meals, and two quarter-pounders with cheese and two coca lights "buzlu" (that's Turkish for with ice or icy.)

Yes, the golden arches beckoned and we succumbed. Truth be told, we would have probably darkened the door of a McDonald's even had we not been traveling with kids. Let's face it, our track record proves it since we have visited a McDonald's in every foreign country we've ever been in - well almost - Tunisia didn't have one, and we didn't visit a Peruvian McDonald's (we found a Chili's instead), but the Columbian airport where we switched flights did. The McDonald's in Costa Rica served eggs with rice and beans for breakfast, the one in Ecuador had hot sauce on the condiment bar, and the one in London was just more expensive. When you're tired, a long way from home and longing for the familiar, there is nothing like a little Mickie D's comfort food. So now that I've paid homage to the the wondrous marketing accomplishments of McDonald's, let's move on....

We walked the few blocks necessary toward the Hagia Sophia - noting the location of the Starbucks for future reference. I didn't exactly know much about the history of this grand edifice except that it had a lot of history - the details of which were quite vague in my mind and still are since it's been around for nearly 1,500 years!

It turns out that construction of the current building was initially completed in 537 AD by the Byzantine Emperor Justinian after previous buildings were destroyed in riots. The church itself was dedicated to the second person in the Holy Trinity - the word of God sent to earth in flesh as Jesus Christ. The Latin phonetic translation of the Greek word logos is Sophia and Hagia means holy - thus the meaning "Holy Word." And here I mistakenly thought it was named after a Saint Sophia, who I felt sorry for due to the phonetic similarity between the word Hagia and the English word hag. Alas, Saint Sophia is saved from such a negative connotation.

Constantinople (now Istanbul) was conquered in 1453 by the Ottomans and the Hagia Sophia was subsequently converted to a mosque. One of the most striking aspects of the Hagia Sophia besides its immensity and grandeur is the beautiful artwork that it has housed over the years including golden mosaics many of which have been plastered over throughout the centuries. Some have now been uncovered and restored.


There has been some debate as to how much more restoration should take place. For the moment, there is a balance of art from both the church and mosque periods. Regardless, it is a grand site and I'm glad I had the opportunity to visit.

What a treasure trove of history is Istanbul and in fact all of Turkey!  I hope to go back sometime - Insha Allah (God willing).  There is just so much more to see and explore.

My little girl turned three a couple of weeks ago. We celebrated with a weekend at the beach where we met up with some good friends for beach and birthday cake. We took the RV and stayed at Carolina Beach State Park for three days.  It was a great weekend filled with beach, aquarium, friends, cake, presents, more beach - it was lovely!