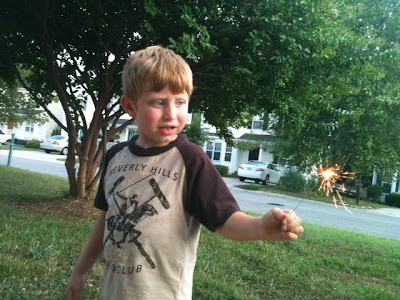 Thanks Livi for the sparklers. I shared them with Jonah. He said,
"That was cool!"
Posted by Shanna at 6:47 PM No comments:

Our first full day in Turkey was very relaxing and we felt pretty good - only mildly jetlagged. We began the day with breakfast at a corner cafe down from our apartment and then we spent the greater part of the day at Topkapi Palace.

Originally built by the conquerer of Constantinople, Mehmed II in 1465, Topkapi Palace was used as the primary residence of the Sultans and place of the Ottoman court until 1856 when the European-styled palace Dolmabache was completed. We visited Dolmabache our on our last day in Turkey and Topkapi was definitely my favorite of the two. The architecture and details are unique to any thing I have seen previously and exquisitely beautiful to mine eye.

More Pictures from this day.

You've Got a Friend

To my friends Vildan, Serap, Nese, Aysel, Yasamine and Vijdan

Posted by Shanna at 3:53 PM No comments:

Jonah went back to the Dentist for his checkup and cleaning this week.  Since his last visit he lost a baby tooth and also has 4 permanent molars. I recall having seals put on my teeth as a child and when I mentioned it to Kelly he thought it sounded like a good idea.

So, at Jonah's appointment this week, he endured an additional 30 minutes of someones hands in his mouth in order to seal and protect those lifelong teeth.  He was such a trooper!  I was so proud of him.  He didn't complain and kept opening his mouth on command.  (The Vegetales cartoon on the screen definitely helped.)

We've been going to Stansell Dentistry in Brier Creek and they do a great job with the kids.  I like that we now have a dentist where we can all go and feel comfortable. 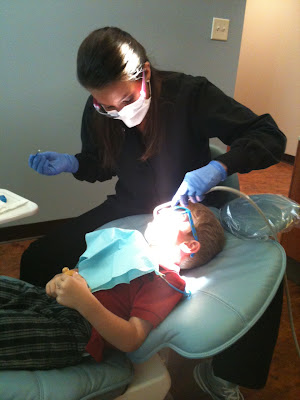 As an aside, my brother in law posted this picture on his facebook page of an example of what a child's skull looks like before their adult teeth come it.  It is very interesting but equally creepy, so don't click on this if your sensitive. Honestly, I found it a tad disturbing and couldn't get the image out of my mind for a good 30 minutes, so it is not for the faint hearted.  For those brave souls, here it is!
Posted by Shanna at 7:18 PM 3 comments:

Email ThisBlogThis!Share to TwitterShare to FacebookShare to Pinterest
Labels: dentist

On arriving at the airport in Istanbul, we were all very tired given the time adjustment and overall lack of sleep. After disembarking, we had to go through immigration and then collect our baggage. Customs was laughable considering other places we've been, but I'm not complaining. It consisted of walking by a small, unmanned desk!

Kelly had prearranged transport with Backpackers Travel to take us to our apartment in the historic district of Istanbul - Sultanahmet. (We know from experience if you can avoid getting a taxi in a place where you don't speak the language, do!) The contact was holding up a sign with Kelly's name on it which made them easy to spot. We had to wait around a few minutes however before leaving the airport, so Kelly could get a sim card for his android phone from Turk Cell. He thought it would be more likely for vendors at the airport to speak English and therefore easier to get what he needed. With the sim card, we would then call folks in country and have internet.


The transport from the Ataturk International Airport consisted of a roomy van and Backpacker Travel provided water and juice for our ride into town. The road went along the Sea of Marmara which was lined with park after park. We could sea old walls (from Ottoman time and probably before) for most of the ride and many large barge type boats anchored at various distances out in the sea.
The driver had some problems finding our apartment, but he finally found the right door for the Violet Apart. We had an awesome view of the Hagia Sophia!
But you know what they say, "You get what you pay for."  The apartment itself was smaller than we'd hoped and the shower seemed to be a bit of an afterthought among other things. That being said, we made do and enjoyed our time despite the shortcomings of the accommodations.

After getting settled in, it was only 1 p.m. So, we decided to have a meal nearby and then walk around Sultanamet. We really needed to stay awake in order to adjust to the new time zone, but we were all too tired to really do much or go see anything. After walking around and taking a few pictures, we ended up stopping at another cafe and just sitting and sipping beverages and eating ice cream.
Finally, we could stand it no longer and went back to our apartment to get ready for bed. We managed  to stay up until 7 p.m. local time (12 p.m. Raleigh time) - that put me and Kelly at 30 straight hours without sleep.
I pretty much slept straight through to 7 a.m. the next morning. I did wake up sometime in the middle of the night and took this picture of Hagia Sophia with the moon shining and birds flying above. 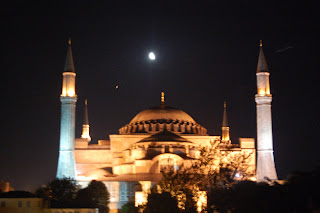 Posted by Shanna at 8:49 PM No comments:

Father's Day at the Pool 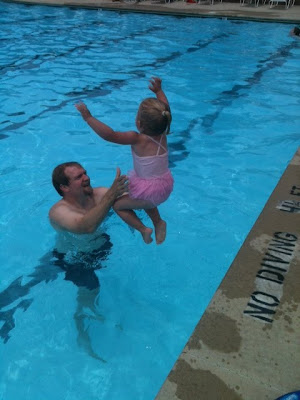 Posted by Shanna at 2:28 PM No comments: 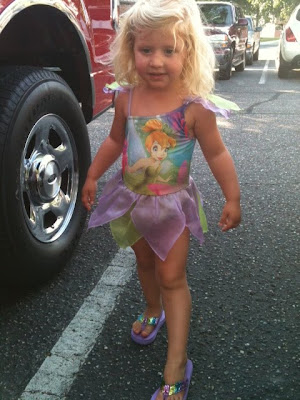 Posted by Shanna at 8:27 PM No comments:

We set off for Turkey with our friends Jeff, Sheila and Livi Burns on Saturday morning. 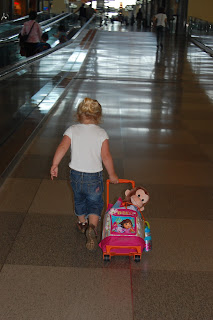 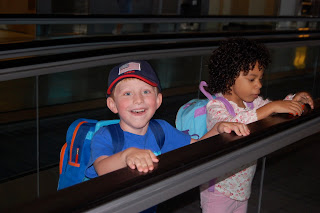 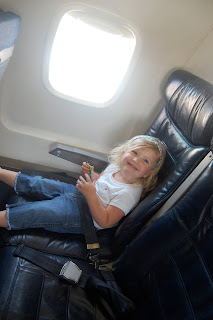 Things started off with a delayed flight from Raleigh-Durham to New York's JFK.
After a quick lunch in the international terminal, we went to the security line only to be turned back to the counter for Turkish Airlines, because what we had in our hands weren't actual boarding passes. So we ended up cutting our time a little closer than we planned after having to go through that long line and then security. Typical stuff when you travel overseas. 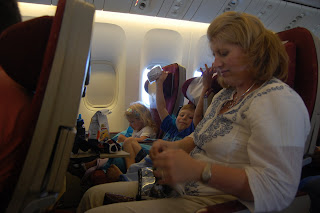 The kids enjoyed all the freebies that Turkish Air gave to them - everyone get's these packets with eye covers, socks, lip moisturizer, a travel toothbrush and a little thing of toothpaste. The children on board receive an additional packet with airplane shaped binoculars and a blowup airplane. The best thing about Turkish Air though is the food. The food is cooked on board by a chef who greets you as you enter the airplane and it is yummy! The chicken and rice dish was delicious and came with a teeny shrimp salad, traditional salad, a desert and a hot - yes, HOT! - bread roll. The alternative dish was a Cannoli and it was equally good. Turks are known for their great food and hospitality and their flag carrier airline reflects this tradition.
The kids took awhile to fall asleep but did end up sleeping the last 4 or so hours of the 9 1/2 hour flight.  Kelly and I on the other hand could not sleep.  Our bodies were telling us it was 2:30 in the morning when we arrived in Istanbul, but local time was 9:30 a.m. 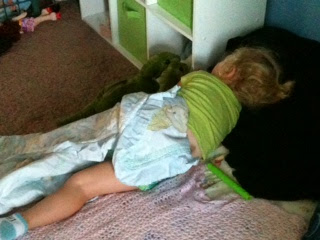 While in Turkey, the kids had no set bedtime. We were freebirds
sometimes not getting home until past 11 p.m. With the bright mornings
they didn't sleep in much either. So Elisabeth developed a habit of
taking 30 to 45 minute power naps. Looks like she is still in
need....
Posted by Shanna at 3:43 PM 1 comment:

Email ThisBlogThis!Share to TwitterShare to FacebookShare to Pinterest
Labels: Turkey

We made it back from Turkey safe and sound, but minus one tooth. On our first or second day there, Jonah announced his tooth was loose. I thought he was joking. But, turns out, this time he was for real. We left it alone and by day 8 while visiting a cave - the Chapel of St. Basil in Goreme to be exact - Jonah announced that his tooth fell out.

I was shocked that he is already loosing his baby teeth, and was certainly not expecting such a milestone to occur on our trip.  My baby boy is growing up!

I was interested to find out the Turks have a similar custom when their children loose their "milk teeth" as they say. We kept such a busy schedule while there, we never put the tooth under Jonah's pillow. Instead, we brought it all the way home only to loose it in the stairwell this evening. We're still hoping we find it. (BTW, Jonah knows that there is no real tooth fairy just mom and dad, but he still wants to do it.) Tonight, Kelly promised him money even if we don't find the tooth and he was satisfied with that.... 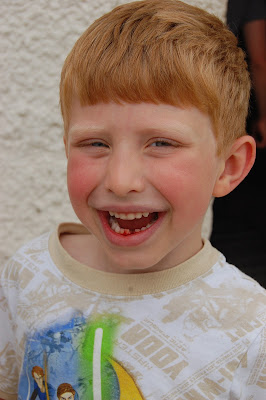 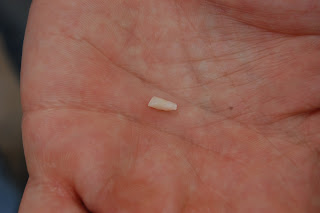 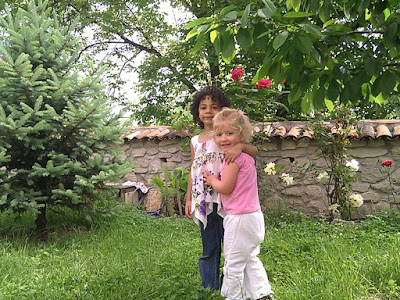