We are getting ready to move in a couple of weeks to an apartment complex closer to my husband's work. And today was Jonah's last day of preschool this year. The move means it will be impractical for him to attend the same preschool next year. A few days ago I began to wonder if Jonah will miss school and his friends. It occurred to me that I should pray for friend for Jonah at our new apartment complex. So the other night when I was putting Jonah to bed. I asked him if he wanted to talk to God about anything and particularly if he wanted to ask God for a friend at the new apartment. He replied, "You mean like Elisabeth?" I said, "Well yes, your sister is your friend but would you like to pray for a little boy to play with and be your friend." He says, "Nah, that's okay." I said, "Well, maybe you could just thank God for Elisabeth then."

Needless to say I was humored and touched by his response. It's funny how, as a mom you can worry about things for your children, that are just not issue's for them. So I thank God that they enjoy each other and pray that they have a special, sweet relationship as long as they live. - Amen Summer is nearly here as Jonah will be done with preschool this week. I've been thinking about activities for the summer and collecting information so we have low cost options through the week. Here are some things I'm keeping in mind as the summer approaches.

Regal Cinemas is continuing its Free Family Fun Festival this summer. They play "kid" type movies on Tuesdays and Wednesdays at 10 am. Admission is free - snacks are not. Some theatres have catered to this group with left over popcorn from the night before selling it for $1. This is more the exception than the rule. So, keep that in mind when trying to keep things cheap.

Many bowling alleys are participating in the Kids Bowl Free program this summer. Where kids get two games of bowling free per day during the summer. You have to sign up at a specific bowling alley and then they send you coupons in a weekly email. I already received coupons as the program starts this week.

Libraries and bookstores offer free story times. The state museums here are free as well. And let's not forget the myriad of parks available.
Posted by Shanna at 7:42 AM No comments:

Email ThisBlogThis!Share to TwitterShare to FacebookShare to Pinterest
Labels: summer

Are you a LEGO Fan?

If you are, then you will totally love these pictures. We went to the 2010 Raleigh BrickMagic Festival on Mother's Day (mom's and kid's under 4 were free!). Some of these LEGO Models were spectacular. Enjoy! 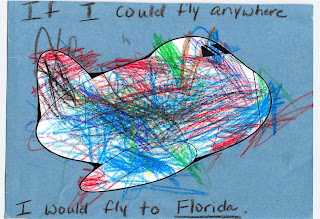 Jonah's preschool this week is discussing the topic of travel. Today the kids were asked, "If you could fly anywhere, where would you go?" And then colored an airplane. As you can see, our family is not far from Jonah's mind.
Posted by Shanna at 1:35 PM 1 comment:

Last weekend, we went to the NC Zoo with our friends Zeynep, Serdar, their little girl Serra, and Seyma (Shay-ma) and her daughter Azra. Of course it was the hottest, most humid day of the year in so far, nevertheless, we all had a good time. Tons more picture HERE!
Posted by Shanna at 7:56 AM 2 comments:

... is what I call "The first law of Motherdom." With two dogs and two little people in the house, when it's quiet then you can be assured something "interesting" is going on somewhere in the nether regions of your house. Either the dog is busying himself in the trash or Jonah is making snow in your bathroom by decorating it with baby powder or Elisabeth is trying to figure out how the nail clippers work and clip her own toe nails, or Jonah is emptying an entire bottle of shower gel into his bath. Yes, all of these things happened this week alone! The bath gel happened just last night; I left a brand new bottle of shower gel in their bathroom because we had an overnight guest earlier in the week. At least he smells, REALLY good today!

On another note, Jonah totally dressed himself this morning by his own prompting and with absolutely no assistance from either parent. Amazing! And he made his own bologna sandwich yesterday, with some guidance from mommy of course. He is really getting into helping me cook. (He likes to taste things as we go along.)
Posted by Shanna at 9:39 AM 3 comments:

A Visit with Friends

We got to spend an evening last week with Tyson and Gina and their little guy. Those of you that know them will particularly enjoy these photos. 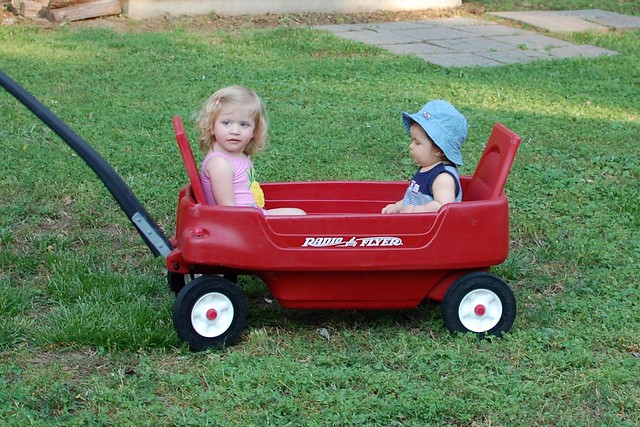 The day after the Waterfowl Park we stopped by the NC Maker Faire. It is affiliated with the publisher of Make magazine. Their website says, "Our goal is to bring together Makers, Crafters, Inventors, Evil Geniuses, Scientists, Artists, and anyone else interested in learning." Not sure which category we fit in, but we "fit in.". They had everything there from people who create model battleships that actually shoot at each other in mock battle to people who recreate items from the middle ages including clothes that they wear (I got the feeling they wear them all the time, not just at special events.) It was a major Geekfest - and we thoroughly enjoyed it!

There were a few vendors/inventions that really intrigued us including a machine that was in essence a 3-D copier, called a MakerBot. The cool thing is it is totally open source (no licensing) anyone can get one and make whatever your brain can think up. One of the guys said that his daughter dreams up furniture for her dollhouse and he makes it on the machine.

The biggest hit was definitely the LinkerLogs that are made out of plywood and produced on a ShopBot. We all had fun hanging out in this room - Jonah would not leave even to go to the bathroom! I really like them too! You could create your own playhouse take it down, and build something different.

Here was an interesting contraption: I helped Jonah "make" a spaceship/hat A couple of weekends ago, we went out to Severn, NC with some friends. It was quite a drive for a day trip, but I was motivated to spend some time with my friend Amy M. Kelly went bike riding with Merl and some others along some picturesque country roads. While me, Amy, and the kids went with some other folks to go strawberry picking and then on to Sylvan Heights Waterfowl Park. We had a very pleasant day. The waterfowl park was really well done. I was able to get some really cool bird pictures. They even have a cool playground I can't remember the names for these guys but they photograph well. We also saw Scarlet Ibis, Turkey, Toucan, Swan among others. Here is the whole set of pictures from the day.
Posted by Shanna at 3:18 PM No comments: