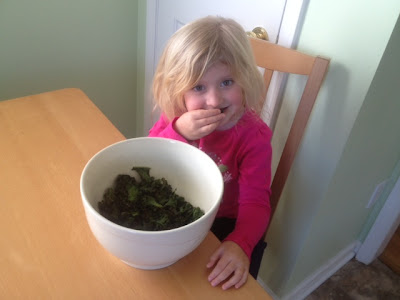 Some friends recommended we try making kale chips. Kale is super cheap
and the recipe is simple so what's to lose? So today Elisabeth helped
me prepare the Kale for the oven.

1) Clean and thoroughly dry the kale. 2) Remove the stem. 3) Cut or
tear into similarly sized pieces. 4) Add to bowl along with 1 TB of
olive oil and salt as desired. 5) Stir until evenly coated and then
spread on a pan covered with parchment paper. 6) Place in oven that is
preheated to 350 degrees. 7) Bake until slightly brown - for my oven
turned out to be about 7-8 minutes.

The astounding thing was Elisabeth actually ate a couple of pieces
without any coercion. Afterwards, she said, "I don't want any more
because it looks like seaweed." Oh well, she still ate a vegetable
that wasn't green beans so mission accomplished!
Posted by Shanna at 3:49 PM No comments:

One of our Funniest Home Videos

From our trip to Banner Elk, NC last weekend. Watch and witness Elisabeth's first time to sled all by herself, and boy is it a doozy!

Daddy and Elisabeth at the Zoo: Then and Now 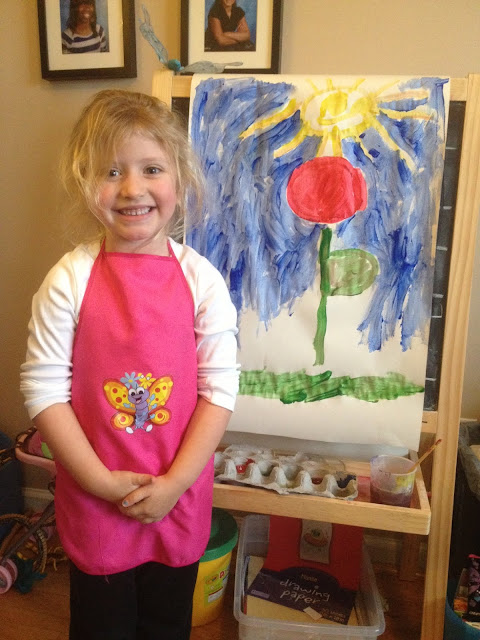 I'm Going to be an Artist 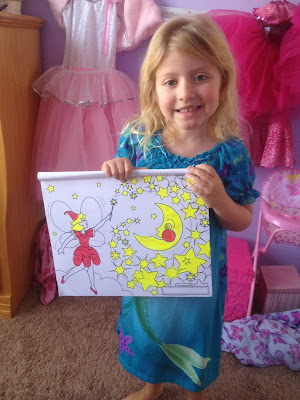 Another Lost Tooth is LOST! Doh!

Well, we did it again. We lost Elisabeth's tooth. There is just something about us and baby teeth.

Yesterday, as I was brushing Elisabeth's hair, her tooth came out. She went to put it under her pillow and I said, "let's leave it here in the bathroom right now." "No I want to put it under my piwow." I knew it wasn't a good idea, but I rolled my eyes and let her do it. This just confirms that you should not ignore your instincts.

It just so happens that we are in the process of cleaning out and reorganizing. Yesterday, Jonah and I cleaned up and organized his room and all his toys. Then I changed the sheets and vacuumed in both of their rooms - yep, totally forgot about that whole tooth under the pillow thing. So bedtime comes and Elisabeth asks if the Tooth Fairy is going to come and looks for her tooth under her pillow - that's when I realize what I've done. The result of my confession is Elisabeth bawling and rolling on the floor at the realization that we have lost her second tooth (the first one having disappeared before we realized it was even out).

Then my dear husband comes in the room and upon hearing what has transpired says, "I can't believe you lost the tooth. I would cry too Elisabeth." (At this point, I'm laughing at the irony of it all so that I don't even care.) Kelly starts moving the bed and searching for it. I am confident it won't be found in her room because I know the thoroughness of my efforts earlier in the day - which included washing the sheets. Elisabeth still crying pitifully inspires me to go down stairs for a desperate search of the washer and dryer to no avail. Then, I remember Jonah's bag full of teeth. Bingo! I go dig out the treasure from his closet noticing there is only four in the bag - somehow we misplaced a second one of his since he has lost six (again the irony).  As I consider my implementation options, Jonah comes to me and says, "Mom I have an idea! I was thinking we should give Elisabeth one of my teeth." That's my boy! I said I had the same thought and showed him the bag and the one I had picked out. Then I say, "Don't tell Elisabeth.  It's a secret."  (While I am somewhat aware that I am entering into my first premeditated lie to one child and making the other an accomplice, it doesn't seem to matter at the moment - besides we decided to go along with this whole fictional Tooth Fairy thing in the first place.)

As I enter Elisabeth's room where she is still laying on her back and crying (more at the thought of the lost tooth than because of any concern that the Tooth Fairy won't come - they know there isn't really a Tooth Fairy and it's mom & dad - I guess she was sad not to be able to go through the motions). I go around the bed where it has been pulled out from the wall. Then I pretend to find her tooth. Even dad was fooled for a moment, until he saw the look on my face that said, "Mama worked it out now let's get these kids in bed."

I don't know who thought up this whole Tooth Fairy thing - it's supposed to be fun I guess but you wouldn't have known it last night. There was more drama in my life than I would otherwise have had. We'll see if we continue this act or if the Tooth Fairy has an untimely demise.

Posted by Shanna at 6:00 PM No comments: 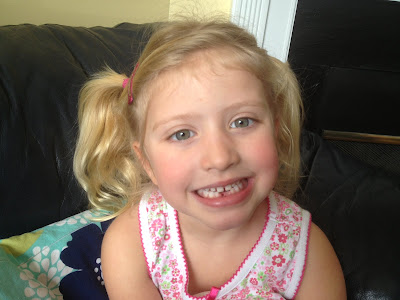 We haven't lost this one yet, so there is talk of a visit from the
Tooth Fairy. In which case, Jonah plans to cash in his bag of teeth
as this will be the first visit to our house.
Posted by Shanna at 11:40 AM No comments: