One day last week, Jonah pee'd in the potty with Daddy's help (I was getting out of the shower). Jonah knocked on my door and said, "Mommy, poop in potty, yay!" I opened the door and Kelly confirmed that he had pee'd in the potty so I gave him a hug and cheered and we put a sticker on his chart.

Later in the week, Jonah had gotten a diaper rash from a long bout of diarrhea. And so Saturday evening at the retreat (we had the nicest room - it was huge with a gas fireplace) we let him run around naked. At one point he started to sprinkle and Kelly asked him if he needed to pee in the potty and he said yes and ran in the bathroom. Kelly helped him onto the big adult potty where he pooped and pee'd. Major milestone as he previously hadn't pooped in the potty at all and this was the first time using the big adult potty.

Then last night, Kelly put him in underwear after his bath. (He had just had a ton of juice/water and his stomach was huge.) After a couple of accidents, we moved his potty from the bathroom into the tiled foyer so he wouldn't have far to go - he was running around completely naked by this time, which he seems to enjoy. I saw him pause and look down and I asked him if he needed to pee and told him to go sit on his potty - he ran over and sat down but pee was shooting forward onto the carpet. I helped adjust him and said to make sure the pee pee went in the bowl. Not sure he quite understood. Oh well. So we're making progress on this potty training thing. Honestly though, he drinks so much and goes so much I'm not sure it's even practical to have him completely potty trained at this point.
Posted by Shanna at 10:20 AM 1 comment:

Well, it seems that Elisabeth now has whatever Jonah got last week. Except it is manifesting itself more as baby puke than diarrhea. She puked a lot on Friday night in the car just as we were getting to our weekend destination. Then Sunday night after we were back in our hometown but at a restaurant it happened again. And then again this morning when I put her in the swing. And then again before lunch. It doesn't look like much more than baby spit up but the volume indicates that it is indeed more than that. She is still pooping and peeing so I'm not concerned about dehydration at this point. And she seems in very good spirits. Funny how kids are - She will break out into a big smile right after puking. If only us adults were so resilient. Just pray everyone is happy and healthy before Kelly goes of to San Francisco for a conference on Sunday.
Posted by Shanna at 6:21 PM No comments: 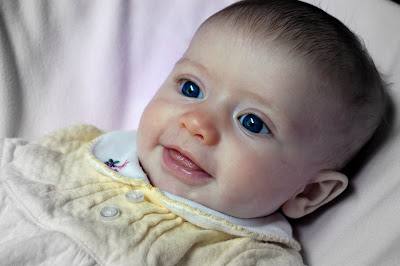 Up and Down with a Sick Kid

Jonah has had some mild diarrhea this weekend. Yesterday, we went to a birthday party that started at his normal nap time. He acted weird the whole time and we thought he was just tired because he didn't get a nap. He acted like he wanted cake but then when we offered it to him he didn't want it. And he went to the car a couple of times wanting to go home. He fell asleep in the car (6 p.m. Standard Time) and we put him to bed when we got him home with a little bird bath before hand - I'm suprised he stayed asleep for that. About 45 minutes later he fell out of bed and woke up crying. He stayed up for a while and ate dinner with us - he actually ate fairly well - corn and fish sticks and fruit. We put him back to bed at 9pm. Kelly checked on him about 11pm and he was sitting up whimpering. On closer inspection, Kelly found that he had thrown up all over himself and his bed. Kelly took Jonah in the bathroom to clean him up and I cleaned up his bed and changed his sheets. About 2am Kelly woke me up saying he needed my help because Jonah had puked again. Kelly took him in the bathroom and discovered it wasn't puke but diarrhea everywhere. So again Kelly cleaned him up while I dealt with his bed - I'll save you all the gory details. We put him in bed again with a sippy cup of water. I checked on him about 30 minutes later and he was sleeping soundly. This morning when he got up he had another diarrhea diaper - this one was a bit more contained, but I still had to strip his bed again. I called the Pediatrician's office this morning and the nurse sounded confident that he had a stomach bug and just said to feed him liquidy, bland foods. He seems fine behavior wise this morning. He keeps asking for food though. Pray that he recovers from this quickly.
Also, Elisabeth had blood in her stool on Friday so they want me to bring her into the Doctor today. I'm confident it's nothing, just a bout of lactose intolerance perhaps, but we want to make sure. It was a dramatic evening but we are all fine. Jonah's watching Sesame Street and we're just keeping everything low key today.
Posted by Shanna at 10:30 AM No comments: