We visited the Cartier-Brebeuf National Historic Site during our stay in Quebec City. In addition to steles commemorating the history of the site, there is a splashpad and playground as well as walking and bike trails run through the site.

Here one can also find a Parks Canada interpretive center with displays of the Iroquois way of life along with information on Cartier and the first Jesuit mission in Quebec established near the site in 1625. The kids completed the Parks Canada Explorer Booklet for the site where Jacques Cartier is believed to have wintered on his second voyage up the St. Lawrence in 1535. At the time, a village called Stadacona existed in the area inhabited by the Iroquois. 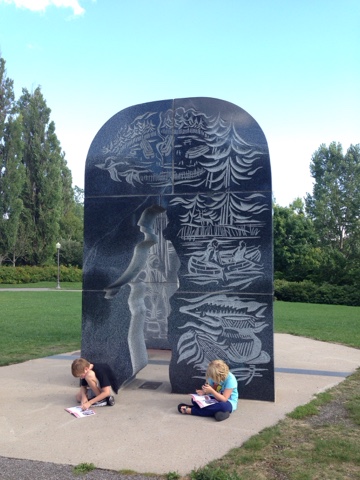 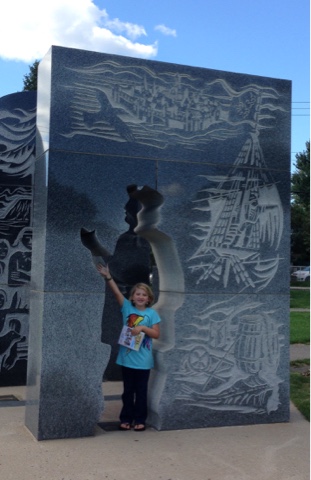 One astounding thing I learned from our visit was that the 16th century natives of the area had a remedy for scurvy that essentially cured Cartier's men of symptoms within 24 hours. Somehow that remedy, a tea brewed from elements of the "tree of life,"seems to have been altogether unknown 75 years later by Samuel de Champlain and the founding families of Quebec who continued to suffer from scurvy during numerous harsh winters. Even today, the exact species of tree used by the natives in their medicinal tea is not known for certain. The main ingredient could of been one of several native evergreen trees. Many believe it was a species of Eastern White Cedar as noted on a display inside the interpretive center. Outside, on another interpretive display, the species is listed as the Balsam Fir.
Posted by Shanna at 12:40 PM