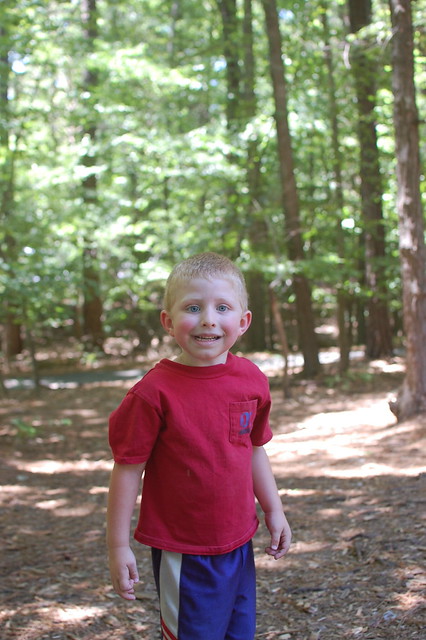 If Mike Row has not hosted a Dirty Jobs episode on motherhood, he really should. I don't know how many times I have had to deal with poop and puke, and, no doubt, any mom would say the same.
Today, was another one of those times.  I took the kids to Lake Crabtree County Park to picnic and walk. While we were at the playground, Jonah chose to poop in his britches. I say chose, because he is completely potty trained and there was absolutely no excuse. While I do not want to read into it and think the worst, it did "seem" like he did not want to be there (it was hot and he doesn't like being all sweaty) and decided to force a departure. So I made him walk (you know that awkward I've got poop in my pants penguin walk) over to the restroom. Well, he makes those messes but still needs my help to clean it up. I did make him participate which is a hard choice for me because it just prolongs the situation (the bathrooms were very hot and stuffy), but it needs to be an inconvenience to him so that he thinks about that the next time he considers making a decision like that. So I found myself rinsing out underwear in the toilet and cleaning him up. This is not how I prefer to spend my afternoon, particularly when there is no excuse. I took us back over to the playground despite the fact that I was sweating profusely and ready to go. Elisabeth still wanted to play and I did not want to punish her for his poor choices. They ended up playing for quite a while. The consequences of his choice was that we would not be playing with playdough today, which is his favorite thing. Hopefully, he'll make better choices tomorrow and get to play with playdough.
Posted by Shanna at 7:06 PM

OMG, this is terrible

Wow Shanna! I admire you for not choosing the easy route. I can sure learn from this. You are so wise. :)