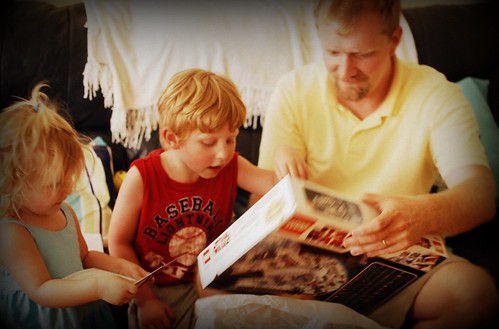 A few days after moving, I found myself at the local mall with the kids. As a reward for good behavior, I took Jonah to the LEGO Store with no particular goal in mind other than letting Jonah play with the LEGO's and looking in amazement at all the wonderful things you can build with LEGO these days. While in the store, it occurred to me that I hadn't thought of anything for Kelly for Father's Day which was fast approaching. With all the business of the move and getting settled, I was afraid I was going to forget completely about it until the day before and have nothing to give him. And that's when it occurred to me that I could get a LEGO set for him and it would be something he and Jonah could do together. As I considered which specific set to buy within my budget, I was torn between getting something more Jonah's speed or getting something I knew Kelly would like. Since it was Father's Day after all, I decided the later was the more prudent strategy. So I purchased the first lego set for our family - LEGO Star Wars Midi-Scale Millennium Falcon #7778. I did get a base plate and a grab bag of mixed legos for Jonah to play with should the completed Star Wars model become hands off.

After the gift was given, while Kelly was following directions and building the set, he says to me, "You should try this; it's very relaxing." So the gift was a hit with both father and son.

We are happy to be entering a phase where the kids enjoy the same toys that we do. (smile)