I began to get a clue something was up when Jonah didn't want to get out of the car at the grocery store and said, "Mommy, I want to go home and take a nap."  Then he nearly turned down the free cookie inside and kept laying his head on his sister who was next to him in the cart.  We got home mid-afternoon after being out a few hours and Jonah went straight for the bean bag to watch TV. After Curious George ended, he fell asleep.  Definitely fighting off an illness.  Elisabeth kept trying to cover him up with a blanket and give him snacks before he dozed off.  Then after he woke up and settled on the couch, she kept telling him to get up and tried to pull his pillow away.  She misses her playmate I suppose.  Later Kelly opened his office door and she went in to tell him, "Jonah sick."  I gave him some tylenol and his fever is down.  We'll see how he fares tomorrow. 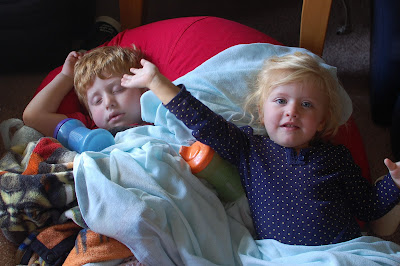