A Trekkie in the Making

Since Star Trek the Next Generation has been put on Netflix watch now, we have been indoctrinating Jonah starting with Season 1: Episode 1. He loves the opening lines that include, ".... Space, the Final Frontier...." At Christmas, he received a couple of Star Trek gifts that are now at the top of his play list.

His dad and I were both impressed by this version of the starship Enterprise that he put together all by himself using his Trio set.  We are so proud! 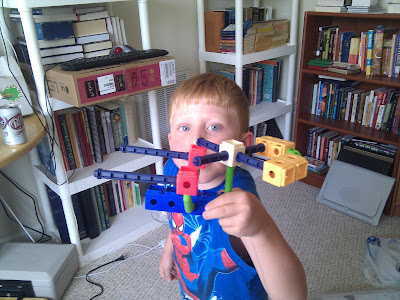 (If you were wondering whether we are sci-fi geeks, well, now you know ;)

Who knows,he maybe our future Captain Kirk,(or at least Captain Jonah Davis)at some point in time of his own star ship.;-)