Cephalopod Expert in the Making

Here is Jonah soaking one of those "soak and grow" toys from the dollar store in the tub - it's an octopus. We left one in Florida at Grammie's house and so here is his replacement. 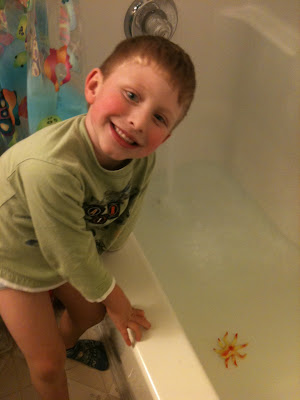 This young man is obsessed with cephalopods - squids, octopus, nautilus - but especially squids. He probably has every squid related toy sold on-line or in stores and still it's not enough - he draws squids, makes cardboard squids, makes pretend squids with anything he comes across.

After watching Disney's 20,000 Leagues Under the Sea, (which we got him for Christmas because of the squid scene) he now has a great affinity for submarines as well.

Just this week, I was thinking about his affinity for these things and how this all began. Which, as I recall, started a couple of years ago when he was three and we watched a Discovery Channel documentary on Colossal Squid. I thought his interest would fade like Thomas the Train or Bob the Builder but it hasn't. His interest has in fact continued to grow in this area to the point that I even started to consider that we may want to move closer to the ocean at some point to help facilitate his growth and knowledge in this area.

In thinking about the upcoming summer, I did a search for oceanside summer camps for 5 year olds. And lo and behold, I found a Marine Quest program at UNC-Wilmington - a mere two hours from home. So instead of planning a move, I think we'll just go camping!  Any excuse will do.