He Wakes Up Happy 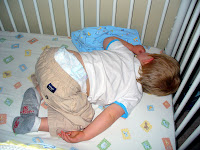 I usually put Jonah down for a nap sometime between 1:30 and 3:00 and he will sleep for a couple of hours. Today was one of those busy days so he didn't get down for a nap until 3. When he goes down so late I don't like to let him sleep for more than 2 hours so he will go to bed on time - around 9. But if he really won't wake up, I'll let him stay for a while longer. Today was one of those days where I opened his door and started the washer and he did not wake up. Here was his state of being.

In the mornings it is a bit of a different story. He wakes up between 8:30 and 9. I don't go get him right away as he likes hanging out in his crib for awhile. He talks for awhile, practicing all the words he knows, and eventually throws all the bedding out of the crib and then proceeds to jump up and down in the crib. By the time I go into his room this is typically what greets me:

Tom and I almost died laughing. This is SOOOOOOO cute!