After getting checked into the hotel and a short rest, the kids and I walked a few block over to Borough Hall for a tree lighting ceremony. I have never been to one before that I can recall. Several of the Brooklyn Borough politicos where in attendance as well as a local R&B group, The Deep.

While all the speeches and singing was going on, Elisabeth kept asking when they were going to light up the tree. Finally, they did and then Santa appeared at the top of the Borough Hall steps.  In dismay, Jonah says "Santa is real!" 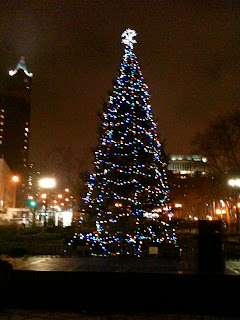 We have not liked the idea of lying to our kids so we have never emphasized the Santa Clause phenomenon. But you can't really get away from him - Santa is everywhere this time of year. So Elisabeth has somehow become a believer of sorts while Jonah remains the pessimist. She and Jonah argue whether he's real or not. Mid-argument Jonah will stop and ask, "Mom, is Santa real?" I usually respond something like this. "Is Barney real? or Curious George?"  Jonah will say no and Elisabeth will say yes. Then I will say, "Well, Santa is as real as Barney and Curious George."  Then that usually ends it - until the next time they decide to argue about it.

I think every kids deals with the Santa in their own way and there is to some degree a desire to believe in Santa. I remember at 5 or 6 that I didn't believe there was a Santa per se. I thought there used to be a  generous guy (St. Nicholas) who gave presents to kids, but that now every community had a designated Santa who played the roll and went around giving presents to kids in their neighborhood. So we all make our own stories surrounding old Saint Nick.

After the tree lighting last night, the crowd was invited into the historic building (the original city hall of Brooklyn) for refreshments. And there, of course, was Santa (they also had a snowman and a gingerbread boy). When we left, descending the steps of the classic greek structure - me carrying the stroller while the kids made their own way down - Elisabeth started sobbing uncontrollably. When I asked why she was crying, Jonah spoke and said sympathetically, "She just wants to see Santa." So back up the stairs we went - me carrying the stroller back up the enormous set of steps for the second time. By that time the line to see Santa was pretty short so I figured it was better than a long wait at Macy's or something. Of course, when we got to Santa, Elisabeth was hesitant, but she then got close enough for a picture. Jonah acted like he wanted in the picture too, but, when I told him to get closer, he shook his head and backed away. 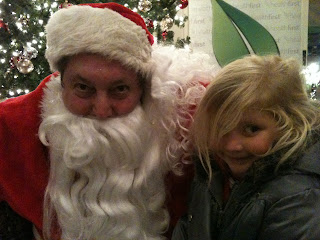