We have a fairly dramatic history when it comes to cutting Jonah's hair. Check out these posts if you need a reminder. We have been commenting to each other that he needed a haircut for maybe 2 months. When I noticed that Jonah was tilting his head up to see me, I was determined that it must be done - no matter how much we all dreaded it. So Tuesday evening after our return from TN, I put him in the high chair (which he is too big for) and turned on some dinosaur documentary on Netflix. Then I laid out a candy bar and told him that after we were done cutting his hair he could have it. And what do you know, he tolerated it all very well. I used both the scissors and the electric clippers. He hated the feel of the cut hair all over him so he chose to get a quick bath and then have his candy bar and finish his show. 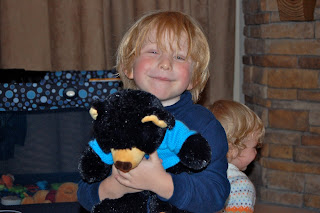 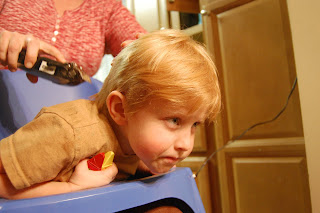 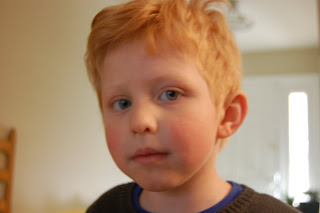 I really like seeing his face. I forgot how handsome he is!
Posted by Shanna at 7:08 PM

Wow! What a difference a haircut makes,still just as cute as ever,guess now he will need earmuffs ~;-D you did a great job Mom.Love to all.