We wanted to "get away" over the holiday weekend, but found ourselves struggling to decide how best to do that. We wanted it to actually feel relaxing (it's all relative when you have two little kids), and not "break the bank." We finally decided a few days before the 4th that camping seemed the least stressful option. The vet kennel that we usually use was booked due to our late planning, so we had to take the dogs with us too. We managed to get the car loaded by 8 a.m. Friday morning including the car topper. We had breakfast on the road and ended up making it to the Linville Falls campground off of the the Blue Ridge Parkway by 12:30. We made it just in time, as there were only a couple of first come first serve sites still available. It turns out that one of the remaining spots was perfect for us - fairly flat and grassy and right next to the restrooms. Our spot was in the open sun, but we got a canopy in anticipation of rain. Here's a picture of our setup: 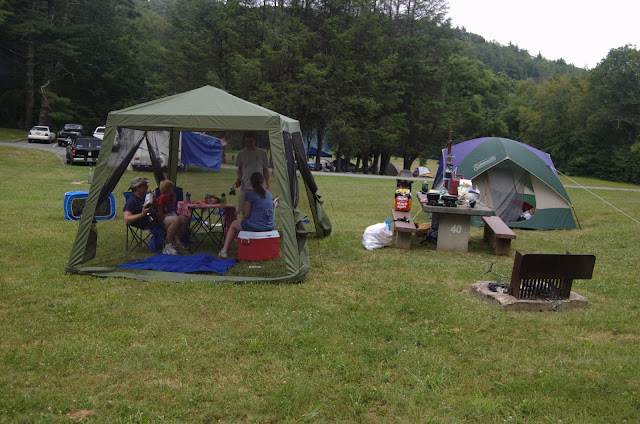 Once we got the camp set up, we made some lunch and just hung out for a bit. Jonah loves hanging out in the tent and throwing the bedding around and jumping on the air mattress - which drive mommy a little crazy! At least I didn't bother putting the sheets on. 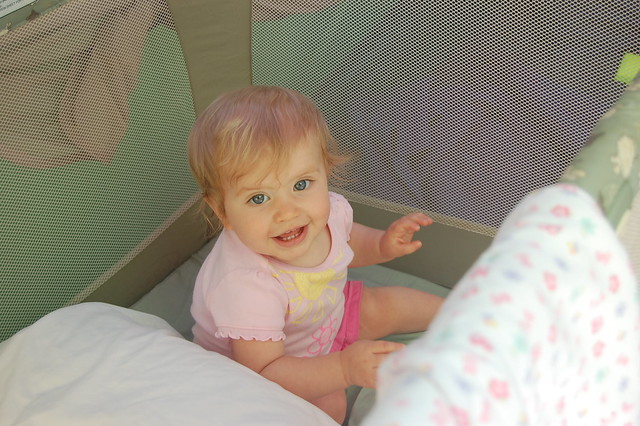 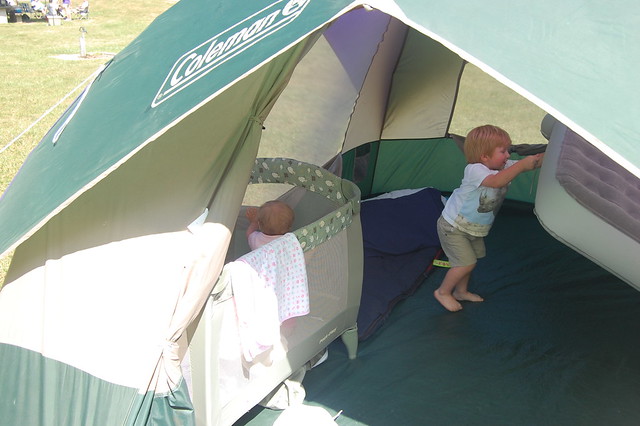 A little later, we decided to take a drive down the Blue Ridge Parkway in hopes the kids would go to sleep. We also wanted to scope out some local 4th of July Celebrations for the following day. The kids fell asleep as expected and we decided to check out this little town called Spruce Pine. In true mommy fashion, I packed warm clothes for the kids but not for myself, so we stopped at the local Walmart for a cheap jacket and asked about the local celebrations while inside. We drove into the old part of town to check it out.
We enjoyed a leisurely drive back to camp along the parkway. 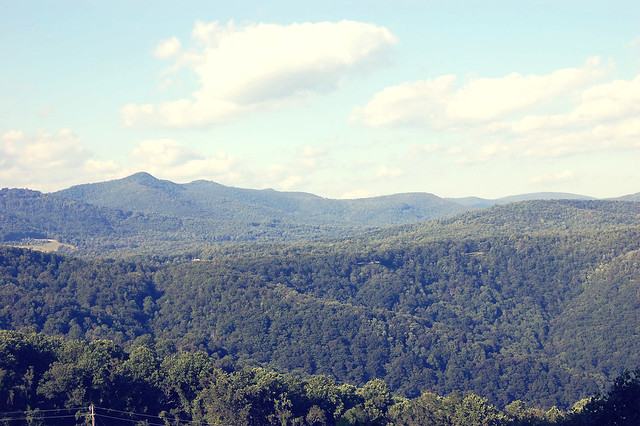 Back at the campground, Jonah and daddy went to a ranger program on snakes while me and Elisabeth hung out at camp and started dinner. The temperature through the day was perfect. It was sunny, breezy and cool. By the time the sun started setting, it was getting chilly. After dinner, Kelly got a fire going and then we ate some s'mores. Delicious!

We had a great day, but the night was difficult to say the least. Bedtime is hard when camping in a tent - Jonah doesn't want to go to bed and Elisabeth is used to white noise which I decided not to bring. On top of that she starting cutting a tooth. So we didn't get to bed until after midnight and we didn't sleep soundly due to the baby and it was really cold. We found out later it got down into the 40's. Kelly chivalrously gave me his only long sleeve shirt (he did have long underwear though) and we both still froze. I also kept worrying about Jonah who kept wriggling his way out of his sleeping bag. If he would just stay in there, I knew He at least would stay warm.

Looks like a great place for camping,you all know how to pick the places for camping.Sure Jonah enjoyed it.And when Elisabeth is up and running around,the fun will be doubled. Could not resist putting the picture of Elisabeth in her playpen on my cell,each picture of her seems so cute.Glad you all had fun.Best kind of get-a-ways for families.