Jonah woke up at 7 a.m. despite the late evening. It was still quite cold so Kelly roused himself and took Jonah to go get more firewood. Meanwhile, Elisabeth and I cuddle with every blanket we have on top of us. Kelly returned to get breakfast going and I got up and sat by the fire. We had a nice breakfast and freshened up (no showers at this campground), cleaned up breakfast dishes, got the dogs situated, and tidied up the site. By the time we did all that it was nearly 11 a.m. (all food related items must be tucked back in the car due to bear issues).

We drove to a trail head that would get us to the first waterfall overlook at Linville Falls. We strapped Elisabeth to Kelly, while Jonah walked the whole way, nearly half a mile, by himself. 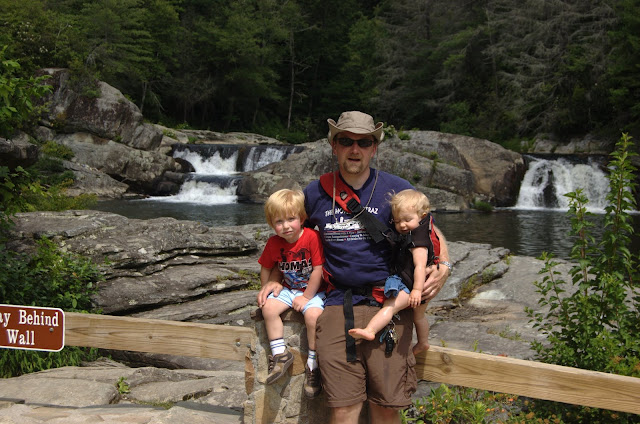 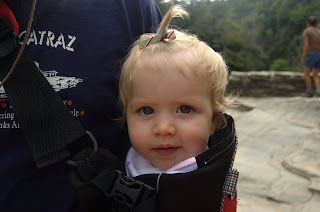 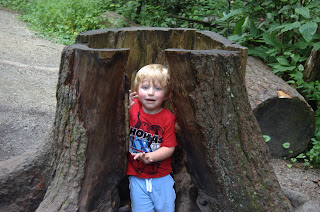 Jonah managed to make it there and back on his own two legs. He started asking to be carried the last 100 ft which was a bit steep. I motivated him with the thought of candy and that seemed to be all he needed.
From there we went down the road to Linville Caverns. It was fairly inexpensive and Jonah enjoyed the stream inside stocked with trout as well as the total darkness when they turned out the lights.
Afterwards, we took a leisurely drive back the campsite and drove a little longer to allow both kids a chance to fall asleep in the car. Some friends of ours were in the area and despite horrible phone signals we managed to tell them where our campsite was located. We had a nice afternoon visit with Amy and Tom. The kids continued to sleep in the car almost that whole time. It was Great! That two hours was the nicest of the trip, just getting to hang out at the camp with friends and a break from the kiddos. Here's a picture of Elisabeth trying to wake up and our visitors. The dogs love Tom and they were on their best behavior for him. 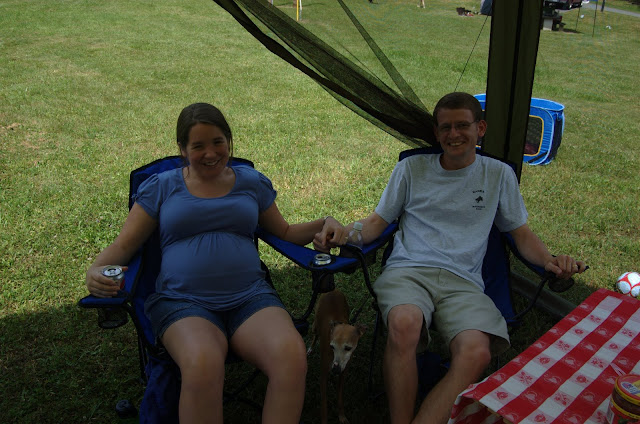 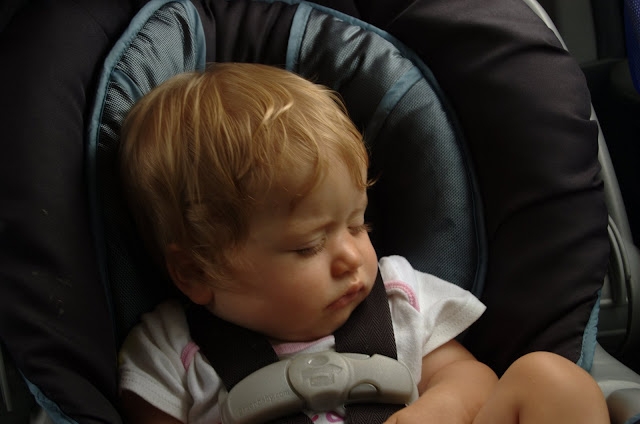 When Amy and Tom departed, we got things ready and left for Spruce Pine for fireworks. I had been told the celebrations would start downtown at 5pm. Well at 6pm it looked like a ghost town except that I spotted a firetruck across the river on a ball field and firemen with augers. We found our way over there and hung out at the park right next to where they were setting up the fireworks. The kids got to play while we waited for dark.

We walked across the river to the street pictured in my last post and got some ice cream and then decided to relocate the car and watch the fireworks from a parking area there. The fireworks started about 9:30 and went for a full 30 minutes. They were right over us. It goes in the family record books as one of our best Fireworks viewing ever. Kudos to the town of Spruce Pine. This was Elisabeth's first fireworks and she did not like the loudness at first. She sat in Daddy's lap while he held her ears, but by the end she was cooing after every blast. Jonah got bored after the first 15 minutes and started asking for food and drink.
Back at the campground the night was much warmer than the previous nights. The kids went to bed easier and we all slept well if not long. The next morning started off nice but turned drizzly so once again we had to pack up the tent in the rain. At least it wasn't pouring like our last camping trip. We took a leisurely route toward I-40 and drove along the shore of Lake James. We stopped for lunch in Marion and then made it home by 5 pm Sunday.