Thanks Grammie and Papaw! 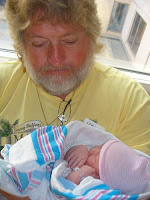 Special thanks to Grammie & Papaw who were able to come up last week from Florida to support us during this life altering event. It was a real blessing to have them here as caretakers for Jonah. Jonah warmed up quickly to his grandparents with whom he was previously familiar primarily via Skype. They all had a great time together and Jonah barely noticed we were away. They brought Jonah to the hospital to visit all three days we were there. It was a major burden off my shoulders and allowed me to focus on baby Elisabeth and on recuperating.
Jonah also learned some new words and now actually will say yes to questions instead of no all the time. He also learned to say "nasty" which he pronounces 'na-thy' and makes a special face just for this word. Apparently, he got that from Grammie who kept telling our dog Toby he was nasty for eating paper towels and other things he shouldn't. Thanks again Grammie and Papaw. Oh and Jonah loves his early birthday present. We took a walk the other evening and daddy pushed Jonah on his bike and mommy pushed baby in the stroller. It was an interesting feeling taking a walk with two instead of one. 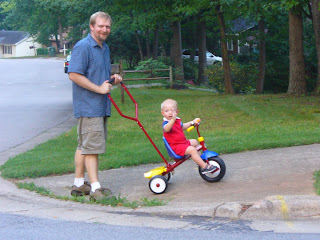