Near Disaster: When a Wheel Bearing Goes Bad

Our last week in Canada was spent in foggy, soggy Saint John, New Brunswick. Mid-week Kelly told me that we would hook up the evening before our departure and adjust the trailer brakes. On our drive from Sydney, Nova Scotia to Saint John they seemed to not be working as well. I tend to think that he is overly cautious and conservative at times while I can be a bit impulsive with a, "Let's just go for it," mentality. I was dreading this whole brake checking thing - we've never jacked up the trailer before and I was leery of the whole process. I was willing to help, but I was humoring my husband feeling like this really wasn't necessary.

So, Friday after dinner, we hook up the travel trailer and begin the process of jacking up each tire and resetting the trailer brakes per instructions. Right front - check, right back - check, left back - check, left front - hmmm..... is it suppose to wobble like that?! and the brake didn't seem to engage well. When I saw the wobbly wheel, I realized my hubby was definitely on to something. Immediately, I started thinking that we needed to adjust our schedule and possibly stay in Saint John another week. I don't know if it was inexperience or being in a foreign country or what, but the process of finding an RV service place and the logistics of getting this thing looked at just seemed daunting. At the time, it didn't even cross my mind that we could just stay in a hotel if it turned out to be a multi-day thing. Honestly, I think the drear of Saint John was seriously affecting my psyche. (I don't mind cloudy, overcast days, but fog so thick it's like walking through soup for 4 days in a row is not for me.)

So here we were planning to leave the next day and not sure what was going on with the travel trailer. Kelly suggests that maybe it's just a loose nut and if he can tighten it and the brakes seem okay in the morning we will go on as planned. (Later he tells me he felt pressure from me to get us on the road, even though I stated that we could stay in Saint John another week to deal with this.) He tightens the nut and it seemed better but not quite as snug as the adjacent tire. By the time we got in bed it is after 1 a.m., and we planned to get up at 5 a.m. to get on the road and get through the border checkpoint 2 hours away. (We didn't really know what to expect from U.S. customs getting back across the border with the RV.)

The next morning, we get up as planned and do our last minute prep which includes taking the garbage out. And don't you know it, either from fatigue or the dark or both, I manage to turn my ankle and go down like a rock. I got up and limped back to the RV thinking, "I hope this isn't a sign that we aren't supposed to go." Thankfully, my ankle was fine, but I bruised my hand and scratched up one knee. After some minor first aid, we loaded up the kids and away we went. 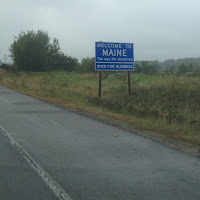 We made it across the U.S. border with no issues or delays by 7:30 a.m. Eastern time. The rest of the day was uneventful, but Kelly diligently checked the tires at every stop.


At 5:30 p.m. Elisabeth says, "I have to go potty." We had just crossed from Massachusetts into Connecticut on Interstate 395 and we were only 30 minutes from tour destination near Norwich, CT. There weren't any rest areas around and being in the densely populated northeast means it's risky to take just any exit. (There often isn't much room to maneuver in the more populated areas.) We pull off the side of the road at the beginning of an off ramp where there was plenty of shoulder space for a bathroom break. As soon as I entered the RV I smelled a burning rubber kind of smell. I went outside to tell Kelly and check on things and met him as he's coming around the trailer. He says, "We've got a problem." We gave each other that "oh no" look and I walked around the RV to see whatever it was he saw. 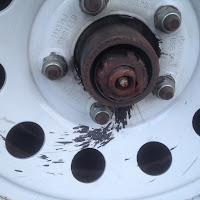 Then began a very difficult decision making process of what to do. We were next to a highway with our kids on a Saturday evening. Can we move it down the ramp and off the highway? But who knows what is down there and if there is anywhere to even park it. Kelly was adamant about not moving it further (and, as it turned out, it was a good thing). If we called a tow truck what were they going to do? Where are they going to tow us? We even considered disconnecting and going to get help but we were concerned about vandalism. At that point I remembered that we have a Good Sam Club membership but not their roadside assistance program. We had Internet, so Kelly got on his computer and signed us up for the Good Sam Club roadside assistance, but, unsurprisingly, we were a bit too last minute. We had to wait several days for our membership to become active. He continued to search the web and found Trucker's Assist: 24 hour Breakdown Assistant for Trucks and Trailers. 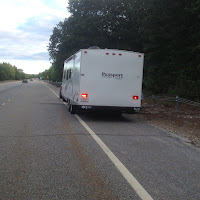 The Truckers Assist dispatcher took down all of our information on the type of vehicle, the problem (which we suspected was the wheel bearings but we weren't sure) and our location. By 7:30 or so, we were beginning to get in contact with all the right folks. Kelly was on the phone quite a while with the dispatcher to make sure we were getting the best and closest service option. The dispatcher found one 20 miles away that could service the RV the next day, which was a Sunday, and she put us in touch with a tow service. Lots of conversations then ensued with the tow company. We thought they would have to put us on the back of a flatbed, but the height of our travel trailer with the A/C unit on top would make the total height exceed the 14' (in some places 13') clearances around here. A mechanic was dispatched to take the tire off and hang the axle so that it could be towed using the remaining 3 wheels. Due to the design of our trailer, the axle couldn't be hung, so essentially that guy came only to take the tire off which we could have done had we known what the final solution would be. Without hanging the axle there was concern by all that it would drag on the roadway at any little bump along the way. He did manage to insert a block in the struts so that the wheel rim stayed higher off the ground. Then we unhooked the travel trailer from our truck so it could be connected to the tow truck. The tow truck was able lift the front a bit higher which would keep the rim/axle from dragging. At this point, we had some major concerns about the weight of the travel trailer (which is fairly maxed out being our only home with all/most our stuff in it) resting on just 3 wheels. We were particularly concerned that the back left tire would overheat under the strain of supporting the entire weight on that side. To compensate, we unloaded a few things out of the RV and into the back of the truck but we were limited in the capacity having already filled it with luggage for a hotel stay. We also shifted things around inside the travel trailer to put more weight up front and on the right.

Then perhaps the most stressful part of the whole evening began as we followed the tow truck with our flashers on. We have sensors in the tires of the travel trailer that send pressure and temperature readings to a readout device in our truck. The tow truck driver kept his speed at 30 mph or so and was very careful on the uneven parts of the road. Nevertheless, it was a torturous 20 miles as we held our breath at every bump and watched the temperature rise in the left tire. We felt some relief when the temperature plateaued at 89 degrees, well above the other tires but well under the 130 degree danger point. Needless to say we were wound up pretty tight the whole 45 minutes or so it took to reach the New England Truck Stop.

You may want to know what the kids thought of all this. While waiting on mom and dad to figure things out, they played in and out of the RV. Jonah even took to gathering all the trash beside the road (behind the guardrail) and sorting it into piles. We gave him a garbage bag to put it in and he was adamant that the recyclables be put in a separate bag. After packing some hotel bags, we picnicked in the RV and then went to sit in the truck to await the tow truck. The kids fell asleep watching Mary Poppins right about the time the two service trucks arrived around 10 p.m. At one point, Jonah said to his dad that he was sorry and he felt like it was his fault because we were going to Connecticut so he could visit the Nautilus Submarine Museum. Kelly straightened that out, of course, and Jonah was fine about it afterwards. 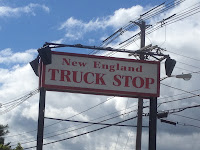 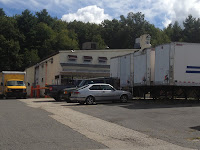 We made it to a hotel around 1 a.m. and when we called the New England Truck Stop, they were already looking at it and assessing the situation. As suspected, it was the wheel bearing that had gone bad. We were very fortunate as the spindle was salvageable and only the bearings and seals needed to be replaced. The maintenance technicians had to wait until Monday morning to get the parts but by noon Monday we were able to pick up the RV. The folks at New England Truck Stop were great - they checked all the other wheel bearings and repacked them with grease. They said that we were lucky and we had definitely made the right decision to not drive it further as it would have caught fire. They indicated that they have seen worse consequences of wheel bearings going bad - everything from axle replacement to the vehicles themselves catching fire.

Hindsight being what it is, we should have waited in Saint John, gotten things checked out and taken care of it there even if we had to stay in a hotel for a few days. We likely would have saved hundreds of dollars. Ironically, we had a decent hotel stay in Auburn, MA and got to go to the Submarine Force Library and Museum as planned in Groton, CT on Sunday while we waited.

Two weeks ago, Elisabeth asked, "When will we stay in a hotel again?" I think I said something like, "Maybe never." Then she says, "Maybe when the RV breaks down we can." Out of the mouths of babes!

Here are some things I learned this weekend: