We began our journey when we picked up the RV rental in Durham and brought it home to load all of our gear (i.e. sheets, towels, food, clothes, dogs etc.) We were bummed that we couldn't pick up the RV before twelve noon that day. By the time we got it home and loaded, installed the carseats (had some issues there) and made sure everything was working it was 4:30 p.m. before we got going. Leaving as late as we did, we had to alter our original plan and decided to stay near Richmond, VA at Pocahontas State Park. It was dark when we arrived, so we hooked up the RV to the water and electric and started getting ready for bed. We used the showers at the campground, deciding to keep the RV option as a last resort.

The next morning, we had a nice breakfast after which Kelly and Jonah took a bike ride. We then decided to head out wanting to get to higher ground for the more pleasant climate. However, this state park had an Aquatic Center. Having worked in parks and recreation this was a major paradigm shift for me. In my experience, swimming pools and aquatic centers are typically the purview of municipal park systems. To see one in a state park was bizarre. We decided to check it out and it was a definite hit with Jonah. It was like a playground in a shallow pool with water shooting out everywhere. It was very refreshing for all of us and even Elisabeth seemed to enjoy it. Here is a picture of her afterwards, asleep in my arms. 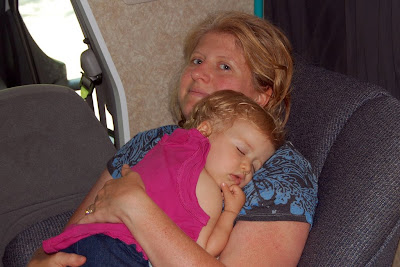 We left there around noon and went to a Chick-fil-a for lunch. We then headed north to Front Royal the northernmost entrance to the Skyline Drive in Shenandoah National Park. Once on the Skyline Drive we were quickly rewarded when we saw a Mama Bear and her cub. I have seen black bears before but don't recall ever seeing a mom and cub before. (The pictures are a tad blurry because the RV was still moving. Kelly couldn't stop because Toby was barking and acting like he was going to jump out the window.) 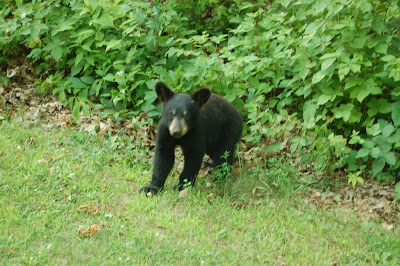 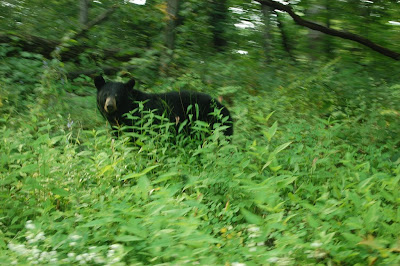 We drove on down the road and stopped at Mathews Arm Campground for the night where we had some typical camping fare - hotdogs. We had to pack most things away before bed as rainy weather was eminent. Here's a couple of pictures of the campground and our setup. 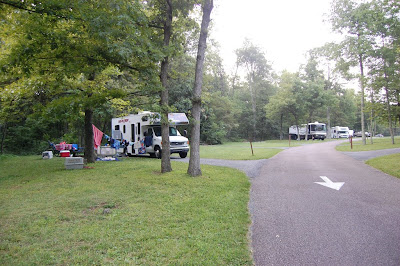 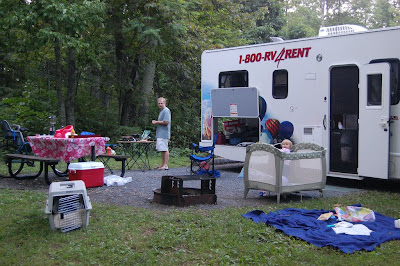