Brooklyn is Becoming a Blur

Our stay in Brooklyn is more than halfway over, and I'm finding if I don't blog about things every day, I forget what went on.   So even though Wednesday and Thursday weren't particularly eventful, I will describe it if only to help my memory.  I have found this week that my stamina for being a full-time parent and seeing the sights has diminished significantly.  Just being a mom to a 4 year old has been about all I can handle and, frankly, I don't feel like I've handled things all that well.  (I think four year olds are way harder than two year olds by the way.  I'll probably be blogging more about this later.)

So, Wednesday I made eggs for breakfast and we set off walking in the general direction of Kelly's office, but through a big retail area.  I was hoping to find some postcards and an "I love Brooklyn" shirt to no avail.  My overall goal was to get close enough to Kelly's work so he could meet us for lunch since dinner time was turning out to not be such a great time for a family meal.  It was well into the lunch hour when I found myself in the middle of a very busy area and Jonah telling me he had to go potty - he waits until he REALLY has to go!  So I ended up ducking in a KFC/Nathans/deli and, of course, restrooms provided to customers only, so I ordered the kids some corn dogs at Nathans.  The lady behind the register took pity on me and let me in the employees bathroom which was right there verses walking into the recesses of the premises.  Empty bladders and corn dogs in hand, I strapped the kids back into the stroller and left.  I called Kelly somewhat in despair thinking I was still quite a distance away from his work.  Turns out I was only a 15 minute walk for him so we decided to meet at a Chipotle near my location.  Thus we managed to all sit down together and eat lunch. 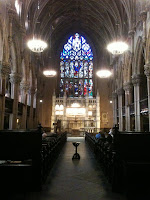 Afterwards, I stopped in an ornate Episcopal Church (Saint Ann and the Holy Trinity Church) with a sign that indicated a weekly organ concert was playing.  Turns out it was canceled for electrical problems, so I snapped a couple of pictures with my phone of the interior and then set off for the Brooklyn Heights Promenade where we had previously noticed a playground.  This was the first view of Manhattan from this spot in the daylight.  The waterway is so busy with barges and ferries and sailboats and more.  I found the playground and let the kids play for a while.  Then we headed back through the retail area making a zigzagging route and eventually made it back to the apartment.  The kids had snacked quite a bit so I decided to take them to the playground.  We ended up staying there till after dark until Kelly walked up.  We ended up having dinner at a Bar-B-Que place called Smoke Joint a couple blocks away. 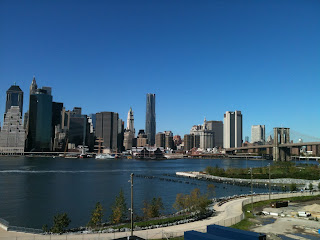 Thursday, I got up early and walked around a few blocks by myself stopping in a couple of stores for some milk and OJ and grapes etc.  I also stopped and got myself a latte and a pastry (an almond croissant - yummy!) and then headed back to the apartment.  By that time, Kelly was ready to leave for work.  I took the kids to the park for a good long while and then we went to the Target and a nearby grocery store.  The forecast was calling for rain so I bought some things to prepare at the apartment and planned for an evening in.  We returned to our street about 3:30 and I was surprised that it hadn't started raining already.  I let the kids play at the playground for another few minutes, then we unloaded the stroller and put it in the car.  With some exertion, the kids, myself, and our groceries made it up the three flights of stairs and we had a nice quiet evening at home with our first home cooked meal.  Kelly was pretty wet when he got home and was glad to come home to food - hamburger patties (Kafta-like, but not quite - didn't have all my spices available), baked sweet potatoes, peas and salad.

This was fun to read! I'm open to living anywhere, although Manhattan is my preference, Brooklyn does seem really great. Where did you live? Have fun in Novia Scotia. Can't wait to read about that!
P.S- I watched World War Z after you, so now I'm a little obsessed ;)