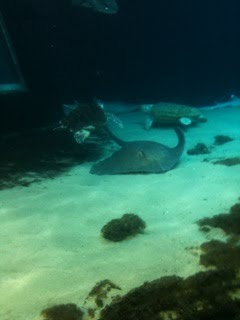 Yesterday was pretty much spent recovering from the weekend. We did go walk to Park Slope stopping at a couple of playgrounds along the way. After the Chocolate Room we went across the street to a kids consignment store called Lulu's Then and Now. Jonah had a meltdown in the store, so we left empty handed.  His fit continued for about 7 blocks. On the walk back to the apartment I was feeling pretty beat down to be honest - somewhat realizing that we were all very tired - mommy included and so I wasn't at the top of my game - so to speak. I ended the day letting the kids play at the playground near our apartment for a couple of hours until after dark.  They had a blast and I got to rest - a perfect ending to a not so great day.
We managed to get the kids asleep much earlier than previous nights and I think it helped make today a better day. I decided to take the kids to the New York Aquarium, which is near Coney Island - a place I had previously only ever heard of in the movies. It looked a bit dreary on this overcast day, but no doubt it seems more impressive lit up in the evening.
The aquarium was very nice if not as sparkling clean as some of the other aquariums I've been to. The rough tailed ray pictured here was remarkable - that is an adult sea turtle in the background to help give it scale. Aquariums are always a hit with the kids so it made for a very good day.
Now I'm at the laundry mat. We've been here over a week so it was time. Certainly makes you appreciate having them in your home - the double stroller is serving dual purposes today.
Oh, and my dad had to give me the 411 on operating a non-self-starting gas oven today, so I could reheat some leftovers. Thanks Dad!